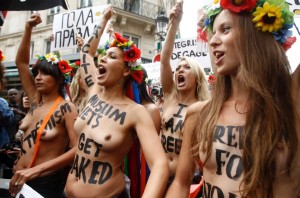 Members from the topless women’s rights group Femen, with messages written on their chests, including ‘Muslims Let’s get Naked’ (C), take part in a demonstration near their ‘training camp’ at the Lavoir Moderne Parisen (LMP) in Paris September 18, 2012. Ukrainian feminist rights group FEMEN members moved to France to ‘recruit soldiers’ in their fight against the discrimination of women. REUTERS/Jacky Naegelen (FRANCE – Tags: SOCIETY) TEMPLATE OUT

One reply on “Members from the topless women’s rights group Femen, take part in a demonstration near their ‘training camp’ in Paris”