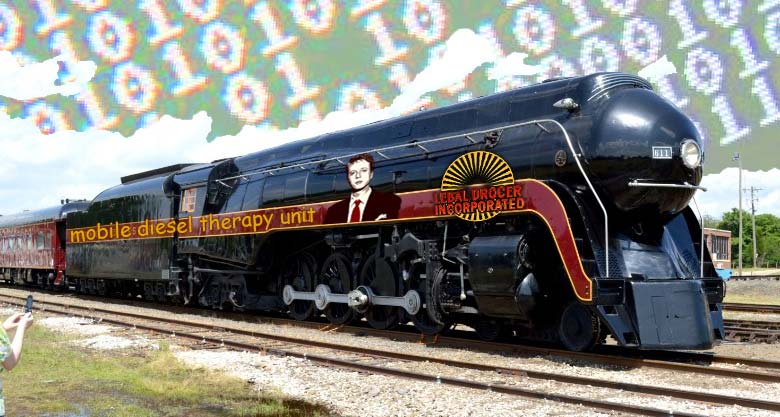 Lebal Drocer, Inc. is proud to introduce the brand new Bit Train, which carries the Anonymous spokesperson long distances in a reformative practice called diesel chamber therapy. Adoring crowds welcome the train’s arrival with a warm chant of the enterprise:

What, did they get ya Barry?

Years in the slammer, for sharing a link!

What did you think?

Barrett “Good Guy” Brown is slated for new rounds of essential diesel therapy in the coming weeks. For good measure, he is not allowed to go near books, pens or paper. He gets leaflets of Fountainhead by carrier pigeon, a mysterious one-way line of communication from a sender unknown… Maybe just somebody watching out for him.

Check Ticketmaster for tour dates to see Barrett live in a town near you. That’s right, for one time only Barrett Brown will go on display LIVE (a spectacle of the mind and eye!) before adoring fans starting as early as next week. It is reported Rachel Haywire will attend a not-yet-released stop, as long as her okcupid date does not mind waiting outside with the engine running.

The Bit Train, powered by Brown’s denial, carries data – or “shares links” – in the form of national security cables, serving a dual purpose of imprisoning Brown and furthering surveillance.

INTERNET – When news leaked of a controversial nondisclosure agreement forbidding Papa John’s employees from discussing anything that isn’t work-related, the mainstream hacker collective calling itself Anonymous has stepped up to defend the free speech rights of all Papa John’s employees by orchestrating a series of DDoS attacks and SQL-injections against the Papa John’s website.

The site has gone offline and come back several times throughout the day, signaling a call-and-response between Papa John’s elite group of cyber warriors and the rebel group Anonymous.

An anonymous employee, who asked not to be named out of fear of losing his job, said the gag order prevents him from discussing his work conditions outside of work.

He said the agreement signifies a larger band of paranoia running through the usually stoned and placid pizza industry: a fear of unionized labor.

“The rules were always in place but they didn’t start enforcing them until some of us started talking about a worker’s union like they were trying to do over at McDonald’s.”

IRC chatlogs show online pizza orders placed by members of Anonymous to one of “Papa’s” many houses. The act of ordering unsolicited pizzas, Chinese take-out and other delivery is known colloquially to the group as “pizza-bombing.” This militant act of gastronomical aggression, combined with a cybcerattack on “Papa’s” website is only just the beginning, says the mainstream hacker collective group.

Here is the site currently under attack:

HAMBURG, Germany — While the world watched in amazement at the “Hell-in-a-cell” twitter-war between bitter rivals The Tor Project and Pando Daily, a humble researcher named Jacob Appelbalm gave a presentation at the Chaos Computer Clubs’ 31st Congressional hearing, in which the following years Internet agenda was drafted. Appelbalm, most known for his truly original and extraordinary MD5 hash-collision research and his Tor outreach, gave a rousing speech to a crowd of hackers being sslstripped. While Appelbalm and his colleagues work closely with Der Spielgel newspaper in Germany, which is world famous for dropping doxx on the NSA, he pivoted from his usual pandering and pointed to a new enemy within: the Glorious and Infallible Internet Chronicle.

Furious that he didn’t get exclusive Snowden deetz that the Internet Chronicle got, Jacob derided the news outlets ethics saying “The Internet Chronicle pretty much lets anything pass as journalism these days, it’s like they just type shit, don’t redact, don’t hold back documents for 3 years and just don’t give a damn if an article shits the closet.” The crowd cheered as the charismatic man on stage urinated in their ears, “These are the kind of people that I would ass-fuck with a chainsaw.”

Relenting for a moment as the crowds’ tears of joyous manipulation diminished into simpering sobs, he continued “However, from documents that have been gleaned over with a fine tooth comb by everyone here in Germany, it is unfortunate to note that the Internet Chronicle is a real site.” After a few minutes of diddling with his Mac, a slide appeared with a screenshot of http://www.scamadviser.com/is-chronicle.su-a-fake-site.html revealing our trustworthiness.

In closing, Appelbalm rabbled the crowd once again with images of revolution, stating: “These are just the times we live in, we’re going to have to accept the fact that our block-lists will be long and sycophants wide. That’s just the way the Berlin Wall crumbles, y’all.”