Marines can use anything that the US military but a max of 10 nuclear weapons. For the Marines to win, at least one of them has to survive. They can’t leave Earth. No unlimited ammo. 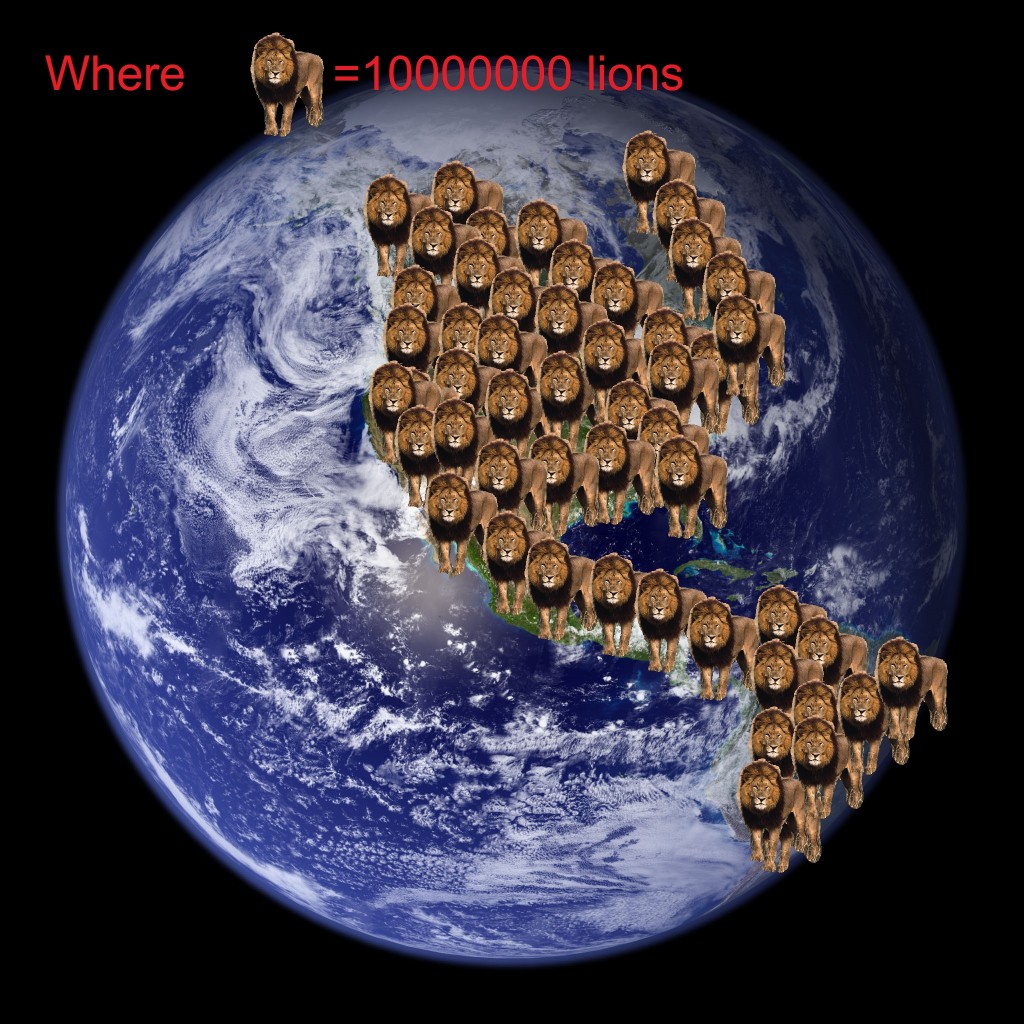 Nuke a cascading perimeter fanning out to the East using all ten bombs. Let the fallout eat away at what’s left. That should wipe out between 1/8 and 1/4 of most of the lions. Depending on how well that tactic works, this could wipe out up to 1/3 of all lions.

But you’re still fighting between 6 and 8 trillion lions, so what do you do? Napalm areas where many lions are known to live. Napalm the largest density areas first, and burn down as much as the forest as possible. Re-deploy agent orange if you need to, since it likely won’t kill everyone and we only need at least one guy. Once you’ve burned out most of the forested areas, then you go to the plains. Plains burn just as easily, if not better. With a focus on incendiary efforts, you can burn out most of a lion’s habitat in a matter of weeks extending into months.

So now we’ve nuked our lions, and we’ve burned out a great deal of their habitat. Lions don’t give up that easily. Lions adapt, or else evolution wouldn’t have carried them this far. They’re basically cats and we’re talking about an absurd number of them – more than this planet can reasonably sustain which is why they must be eradicated, certainly, with no doubt. But they’re living in our cities. They’re occupying.

Using the latest advancements in wartime technology, we’re stretching our men thin at just under 5,000 – assuming friendly fire statistics remain the same – but we’ve manned battleships capable of raining blankets of hot lead down from many miles away, beyond the coastal perimeters where lions don’t fare so well. We are stomping asses and violating a humanist Geneva convention which makes no protections for lions whatsoever. We have broken out the cluster-bombs.

With support from cluster-bombing air fighters, our ships are handed coordinates on which to fire, and we put as much hate on as many lions as necessary, for 25 years.

As our men approach retirement age, the Lion War rages on unimpeded. Those men who have now, in their 25th year of war, killed upwards of five million lions per year are held in high esteem, but more is needed to escape this godless melee. No one gives up. No one mourns the dead who have fallen to Agent Orange and the radioactive effects of nuclear fallout, because there’s simply not time.

Each remaining man must still kill in excess of 5 million lions this year, to make up for the slack of the dead, and to restore order to this oxygen-deprived, fur-choked nightmare, for the oceans are now toxic with disease from the corpses which displace the tides and raised sea level by many hundreds of feet – a thousand in some regions of the world.

With a halt on production, our men have run out of resources – oil, ammo and food. There is nothing on earth left untouched by the Lion War, and some of our men have taken to eating the irradiated lion carcases as a form of self-harm; a prayer for death. Others push on, and have made weapons from bones, but without ammunition, it’s simply not enough. It looks as if the lions might win this year.

Where we managed to kill some of the lions, more reproduced. Where their babies came out mutated and lame, others grew stronger. The lion army never needed ammo, they were better than bombs. They had numbers. It was never our war to fight, really. We were the abscess. We were the minority. There were so many lions, and so few marines, most of the lion population didn’t know we were at war. We lost to the lions.

The whole war, our men were asleep – suffocating from a lack of oxygen – imagining a grandiose solution to the impossible nightmare; of breathing in the final bittersweet hate smell of a preposterous number of lions spawning out of nowhere, consuming the earth which is less dirt, really, than lion.

This godless hypothesis contained way too much lion.

3 replies on “How To Win The Unwinnable Lion War”