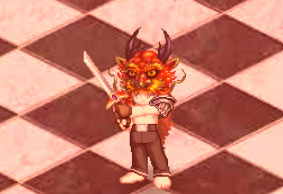 GAIA, INTERNET — Sometimes I go barefoot. I wear a crimson lion mask and deal wrathful protection with a katana.

Before me is oceanic weeb, white noise chatter gathered around a fountain. This is Towns, a graphical chat in Gaia Online. It is IRC with the added benefit of chibi avatars. Gleeful neon pixies dance around cute and funny amidst a cloud of emoticons. Here and there cliques clump up all dressed in a theme. They refer to one another in familial terms — mother, father, brother, sister. It is all as harmonious and lightly joyful as the gentle synth music. Nothing here is evil in the least, and I think of that as I move towards the margins and away from the fountain. Just a few zones away there isn’t anyone at all, just empty neighborhoods where avatars reside.

Roleplayers gather in a small park, quite away from the masses, and are somewhat more reserved. They create roleplaying characters, not necessarily the same as their avatar, with most of the constructive activity taking place outside of Towns. They’ll write thousands of words, draw portraits, and put out comic strips as they constitute each character and their shared worlds. Often but not always they are members of guilds, clans, and families, and may set up duels and even full scale wars with one another. The mood isn’t tense, but clearly not all is serene. They are not this far away by accident.

Griefers are hanging out by a gigantic chessboard adjacent to the fountain. They have their own mangled dialect — a familiar and intentional development to enrage targets, identify one another, and possibly to make their enemies underestimate their evil potential. Being involved constantly in roleplay, if only in Towns, and if only to disrupt roleplaying for more serious players, their opinions on the topic are of course fraught, but they are totally candid,

“I love making fun of people that love it … I enjoy the writing aspect of it.”

Some griefers say they detest the very idea of roleplaying without any attempt to justify the contradiction of their presence, and still others blame the community at large for their own early move from roleplaying to griefing. Some who hang out at the chessboard appear to consider themselves elites in roleplaying. This confused group fights with itself as often as not, and there is some surprising jargon peppered into the chat: Doxing, booting, and swatting.

Zeeden stands at his post under the chessboard, surrounded by white haired bronze skinned beauties, the Regals, and a core retinue of Phantom Clan underlings. His skunk-like avatar is the epicenter of this pathetic activity, online so often and asleep so rarely rumors say he suffers chronic mental breakdowns because his addiction to Gaia is so extreme.

Standing across the entrance to the chessboard are the godmodders of Aeturnum, roleplayers whose creative faculties are impaired. They are dressed in spooky black clothes and perpetually roleplay as immortal supervillains who never lose. In the roleplay scene, this is called godmodding, a genre of writing that exists just to invent powers which keep a character perpetually alive.

In a typical encounter, a griefer will attempt to lure a godmodder or a new roleplayer into accepting a duel and then pull out at the last instant, leaving their target apoplectic. But it doesn’t always work.

Aeturnum has turned out, and Zeeden is shamed for his cowardice after he’s backed out of the agreed-upon duel with their godmodder. The members of Aeturnum, outnumbering Zeeden’s mostly afk crew, deal out accusations of pedophilia and pepper him with insults. The attempted troll has backfired about as badly as possible and Zeeden is completely humiliated. He will disappear for three days as his reputation is further degraded and his fellow clan members make empty, embarrassing hacking threats at Aeturnum. When he does return, it’s his clan that has been hacked.

The griefers of Gaia Online are so prone to rage and self-destruction that I wonder how long they can go on. But I do not expect anything to change suddenly, as much as I like to envision the chessboard in flames. As long as no one stands in their way, they’ll perpetually fuck around in Towns, getting ever greater joy out of the same childish bullshit.

One reply on “Griefers of Gaia Online”

Jakey Applebottom haz been lurkin’ fer raep, I mean luv in all the con & hacker space$. I should know, ’cause I taught him everything a twitter demagogue theRapist needz to know.