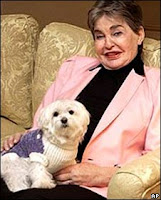 Rest In Piece, Leona. We all loved you.

“We don’t pay taxes. Only the little people pay taxes.”

Okay, so you’re a billionaire real estate tycoon, and your only child dies from a heart attack. What do you do? Well, ask yourself next time: what would Leona Helmsley have done? She sued his estate for all he was worth and left his widow penniless. Their children were disinherited from her will, also.

Her pet dog, Trouble, was to be left a $12 million trust fund. A few of her grandchildren were to receive $10 million each-as long as they were good and visited their father’s grave each year. However, Leona has willed most of her $5 billion to charities that benefit canines. Leona Helmsley’s tax evasion has helped fund dog pounds around the country.

One of Leona’s only other joys in life aside from her precious dog were cold and heartless firings of her employees. In fact, she often treated her employees’ firings as a source of enjoyment. Whether they got a drop of water on her tea saucer or were just too homosexual, she was ready to fire any and every person who ever worked for her, including those refusing to collude in her tax evasion.

She wasn’t just an evil looking old witch who valued dogs more than humans-she was our evil old witch. And now rich people like her are going to be taxed more than ever before thanks to Liberal Red Commies like President Obama. Shame on you America-haven’t you stopped to think about your dogs?

6 replies on “In Rememberance of Leona Helmsley”

It’s a shame her corpse was locked away in some tomb. A man could sure take a lot of pleasure from shitting on her grave site.

reserve your hatred for her dog, which was the only living thing she valued.

i’d pay ya 20€ to have you raep her corpse while her dog watched. Greetz from the darkwebz

Hai I AM BROKEN SPAMBOT 3.7

she had it right. people are shit. canines are from heaven