“I injected it right into my fuckin’ eyeballs,” said Adam Goralski, a 14-year-old Roanoke, Va. native who recently became addicted to ideology. Adam said he used the Internet to administer his first doses of cyberlibertarian bitcoin paranoia. 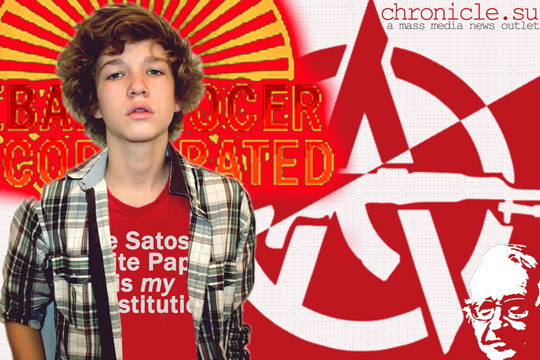 “I just thought about all the freedoms we don’t have, pertaining to bitcoin, and Rand Paul was saying, ‘This Senate hearing is a meeting about how to keep young people from generating their own new forms of wealth,” Adam recounted. “He was talking about Bitcoin as the only true currency without any pretense of statist affirmation or any real assignment of value. Keep your hands off my Bitcoins!’ and I thought, that’s the truth. That appeals to my teenage sensibilities.”

Adam, who wears a t-shirt reading, ‘The Satoshi white paper is my Constitution,’ said he’s turned his friends onto the Bitcoin and, as a result, the value of the currency is already exploding – TO THE MOON! – in their young, feeble minds.

“Every trade is like a hit of my daddy’s cocaine,” Adam professed. “I get on there with my VISA giftcards, and I just go, go, go. Kids of my generation are always going, going. We’re pretty good old boys.”

Adam, who now listens to Alex Jones instead of faggoty schoolteachers, said he bought a 3D printer over Tor – a perfectly clean, Anonymous transfer – and has already downloaded his very first 3D-printable handgun from The Pirate Bay.

“See, the Constitution was a Bitcoin-enhancing document which basically said men could own guns, people as property, and even Bitcoin, the spending of which is a protected form of free, encrypted speech,” Adam said. “See, it’s free but it’s encrypted anyway, that’s how you know it’s protected speech. Don’t trust the government. Satoshi got it right.”

Adam, a member of the armed branch of the cyberterror group Electronic Frontier Foundation, said he’s on the fence about a new president, adding that he would opt instead for a form of anti-neoliberal anarchocapitalism where the value of all things are measured against BTC. But he’s considering a vote for Bernie, whose messages of Hope and Change he readily identifies with, as well as Bernie’s strong pro-war stance since joining the Democratic Party of Peace. Adam is, after all, a very smart boy.

“We’re just some pretty good old boys, though, in the end,” Adam explained. “And all we want is a lawless society where the tyranny of fiat currency no longer burdens True Capitalists like ourselves with its evil. And I think a vote for Bernie just might expedite such a collapse, because the people just won’t stand for it.”

Some of us actually have to work for a living and have no time to just sit around listening to you fucks on btr. Right now I am on public transit with the rest of the unwashed masses, on the Vomit Comet (don’t ask). On a weird note I saw a doc with Noam in it the other day and thought of his letter/email to you.

Well the twitter nerds sure got hard over this paragraph. ‘Adam, who now listens to Alex Jones instead of faggoty schoolteachers, said he bought a 3D printer over Tor – a perfectly clean, Anonymous transfer – and has already downloaded his very first 3D-printable handgun from The Pirate Bay.’ **shoots u w/ that 3D gun, ’cause ironic** Remember when I once imparted to you that there is no such thing as bad writing, well I lied about ur 1st attempt to write a book & so now u can include this abortion too

Whos the pedo below … and did u see the jesterfag group is now selling watches, they’re so totally out faggin’ YAN, first with the throw pillows and now with the watches. It’s like some bad late night infomercial except on twitter.

i almost published a story tonight. wrote the whole thing, and drafted it instead. shitty blog entry anyway, not even a real story

https://www.broadcastify.com/listen/feed/12443/web
Yes, dead on the ground. Near rifle. Reporter says one suspect appeared to wear what looked like a red bra @edkrayewski @abc7marc

https://www.broadcastify.com/listen/feed/12443/web
Yes, dead on the ground. Near rifle. Reporter says one suspect appeared to wear what looked like a red bra @edkrayewski @abc7marc

Ps- Stop being miserable old man fgt. BTW mom says hi from the other (dark)side. And stop talking to the wrong people AGAIN. Didnt you learn that lesson from oversharing w/ b/rave ..

Who do you think I’m talking to? I share very little