JFK might have been a no-good Communist sympathizer, but by God, he was right about one thing: serving your country. Besides, why do you think we had him assassinated?

The new frontier is wrought with peril – freedom-threatening, America-hating, chemically weaponized peril. But we don’t have to stand for it!

Who would have thought a man named Barack Hussein Obama would someday turn out to serve Al-Qaeda?

NOT US! But things are different. By gum, times have changed. America’s taking on a new image. No, we still don’t negotiate with terrorists; we FINANCE them! Where are our tax dollars going? Follow the money! Sign up for Al-Qaeda now, and take part in some of the most freedom-enhancing, civilian-terrorizing fun you can have with your pants off – raping countless victims!

Enlist within one hour of reading this to sign up for our Syrian Autumn event and receive premium access to maximum firepower with minimum consequences! 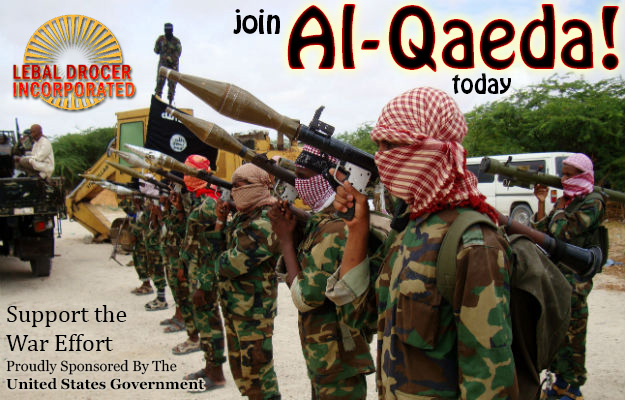 Sign up Wednesday for OUR PATRIOT DAY SPECIAL. Can’t beat ’em? Join ’em! 12 years ago tomorrow, Al-Qaeda bombed the World Trade Center, effectively castrating the American spirit of self-determination. Now, we are more reliant on Al-Qaeda for survival than ever before.

For a stronger America