2. “The Assassination” wasn’t even that good – I know what you’re all thinking: “Alright, now she’s gone too far.” Well, I haven’t. It’s Canadian and therefore, by virtue, completely UnAmerican. Sony owed Joe Frasier a favor for helping them cover up the creation of the greatest game of all time.

5. Chandler Bing was only speaking in metaphors – Throughout the entirety of S02E07 and S04E03. If taken Literally, one may believe that Chandler really wanted to have sex with Monica, however he instead spun us through a North Korean ‘Virtual’ Mind Maze of Ruby version management. He foresaw the future, which is a lot less than we can say for Yukihiro Matsumoto, who chose to betray Rachel(Perl) and buddy up with Joey(stupid fucking spec folders in Ruby, who cares), the fallout being catastrophic, resulting in the whole gang going to prison for violating the Good Samaritan Law.

All five points lead directly to eternal hell and damnation. No… there mustn’t be any melancholy. This is America. This is Christmas.

Dearborn, MI — In a Post-Sony-9/11 world, sometimes Great Leaders have to take drastic measures in order to save our freedom. The once glorious and proud industrial nation of Detroit, home to Ford Motor Company, is nothing more than a large “Urban Garden” and collection of “Urban Decay” Flickr photo albums. Until now.

In what some are saying is simply an “effort to save face,” Kim Jong Un has purchased Ford Motor Company to hopefully bolster the United States’ torn and frayed economy. Considering the United States already owes China trillions of rubles in back taxes, Un was happy to pony up the funds necessary to keep Detroit afloat. Are there big collaborative plans for a prosperous partnership on the horizon or is this all just a smoke screen, a mind-trap for the upcoming memetic Cyber War?

Dr. Angstrom H. Troubador, a finance minor at Ball State and the Internet Chronicle’s Own Boy, believes Un was simply exercising his financial strength as a show of force. “Kim Jong Un is just buying low and selling high, baby,” Troubador says, referring to the timeless Wall Street idiom. He added, “it’s the American way, and I support that.”

President Obama was too preoccupied with hysterical vine clips to comment. 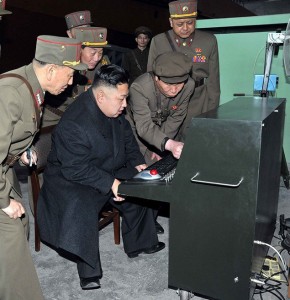 Kim Jung Un announced via a series of Vine videos today that North Korea was not involved with the Sony hack and provided an alibi that will shock the world far more than Joe Rogan and James Flaccos film “The Assassination.” An obviously pumped up Un appeared on his 3MP webcam to proclaim he has been spending the past 3 months on his human futon reading the well documented Sega Genesis’ version of the Game Genie in an effort to find the fabled “Master Code.” In the second vine he proclaims he found the code and is reverse engineering the “Sonic and Knuckles” cheat code known as the “orbital jump for knuckles,” as it holds the keys to bypassing every checksum in every game, even games with PunkBuster.

In a haze of artificial smoke and pyrotechnics, Un appeared for a third vine to say he had obtained the knowledge to bypass every checksum there is. The short clip ended with Un saying that the FBI should “quit givin’ me the business,” and focus on Rogan and Flaccos egregiously terrible films. The supreme leader appeared in a final vine wearing only a spaghetti stained tracksuit and Google Glass, shouting maniacally that “EURO TRUCK SIMULATOR 2 WILL NEVER BE THE SAME!”

Edit: Tor has just been stolen by the FBI as an Act of War, according to our source at the library who really likes Sun Tzu.