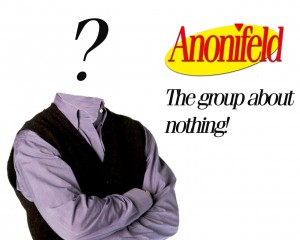 ‘Anonymous’ is the lamest “movement” I’ve ever seen. First of all, they borrow their strongest image from a piece of shit Hollywood film thoughtlessly shoveled out in the general direction of teenagers who like big words. I know this because a lady I was banging when I was 19 showed it to me, and I liked it. But I specifically recall hating that faggy Guy Fawkes mask, and I especially hated the focus of the narrative on some narrow slice of history that, even today, is only cool in social circles in which the prominent leaders are still drawing encircled A’s on their composition books.

More to the point, though, Anonymous is totally impotent, made worse by the same kind of manufactured outrage as you see out of your average TV news piece, attempting to equate their fake struggle against all government, healthy and unhealthy, with the real struggle of the black working class against a small percentage of bullish cops enabled by a cabal of DAs whose favorite shows are Law & Order, and their spin-offs (Special Victims Unit is a favorite among closet rapists). Yo, the police didn’t kill that kid because he was “Anonymous,” they killed him because he wouldn’t put down a knife, so stop acting like the police want to kill you over their ideas. The police want to kill everybody because they’ve been doing whatever they want and nobody is stopping them; in fact, you could say they’re doing God’s work. The police could give a shit if your homeboy was wearing some Halloween mask. He might as well have been wearing a strap-on.

Your movement is weak, and you’re weak fucking people. Stop it with those stupid masks and stop acting like you stand up for something when you wouldn’t stand up to pee. May I suggest getting off the fucking Internet if you don’t like the government, and going to a few meetings? [I am laughing to myself as I write this, because the thought is absurd: just imagining these pasty, disgusting slobs dragging their fat guts, covered by black Game of Thrones t-shirts, into a municipal building to participate in local government is so funny to me.] What are you going to tweet when you get there, huh?

And you don’t even fucking think of where those suggestions are coming from. You want to fight the power? Use the government, don’t act like it’s in your way, preventing some phony utopia from unfolding. Do you faggots even know what anarcho-capitalism is? Well, eliminate the government and find out. The central tenet of anarcho-capitalism is that without government interference, we can have something WAY MORE PROFITABLE AND HATEFUL than even the TPP‘s wildest aspirations. The government is supposed to be the people’s instrument for the prevention of corporate tyranny over the people, NOT an enabler of it. Which part of V For Vendetta covered that? Oh that’s right, none of it, because Hollywood, like a dumb animal, shit it out without even stopping in its tracks (the same company that produced V For Vendetta also created the turd-rific Speed Racer remake).

You want revenge over Momma’s little baby who wouldn’t set down his pocket knife? Here’s your list. Get to work.

[Editor’s note: I knew you wouldn’t do it, spineless fucking losers. Go do something you’re good at, like DDoSing a gameserver.]