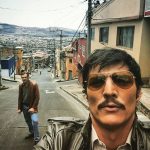 When I think of South American drug cartels, I’m reminded of the beheading videos I used to download from Limewire and Kazaa in the year 2000.

And it would be a 90-second clip of a man’s head being sawed off with a machete, while someone tickles his feet.

Now this season of Narcos has me rooting for notorious narco-terrorist Pablo Escobar, and I even started playing as him in Tropico (I’ve put away about $200,000 in the Swiss bank account so far). But I have a serious problem with the lack of violence in the show. Sure, last night I lazily witnessed a prostitute’s brains splatter across the turquoise tile of a Medellin brothel, but it’s simply no substitute for the desperate gurgling of a freshly slashed throat. If you’re going to make a show about the horrors of drug cartels, and you want to do it right, you need to include the missing viscera.

Once you’ve heard that sound, whether you picked it up on the defunct ogrish.com, or witnessed it during an impromptu, late-night 4chan desensitization session, you never forget that sound. And without it, Narcos – with all its violence, gore, and begging for mercy – falls short of shocking me into objectivity.

I am still pulling for Escobar, because I feel like his delusions and transgressions, along with his crimes against humanity, including the downing of a passenger plane to Cali, are more justified than the DEA’s corporate-backed, victim-creating hunt for the creators of a gasoline-soaked leaf.

And this feeling should not come from within a story narrated by “the good guys,” who refer to themselves as “the good guys,” and are, themselves, also rich and multidimensional. The notion of an untrustworthy narrator is not lost on old hatesec – I mean tens of thousands of dollars worth of useless degrees at least reinforced that device in my mind – but it also fails to account for historical gaps in the narrative, and a disappointing insistence on keeping Escobar as a main character in the Narcos storyline, when he only exposed the profitability of the drug, and whose work would later be superseded by the natural evolution of drug cartels in general, including the cartel that spared the wife of Escobar’s family. The “good guys” versus “bad guys” thing just doesn’t hold up when we are talking about a ground war involving billions of dollars, the overflow lost to pharmaceutical conservatism, sheathed in God, the Bible, and Ronald Reagan.

There’s even missed opportunity for the rich backstory of Escobar’s wife, who faithfully stuck by her crime lord husband through his flagrant infidelity, and whose own life was spared by the incumbent cartel who exposed their own wives to intercepted recordings between Pablo and his wife, in order to demonstrate “what a good woman does” for her husband. That is, stand aside while he fucks whores and brings home their diseases. The lost opportunity for feminine perspective – which seems like a welcome and obvious message in the tumblrized minefield of digital publishing – is not just disappointing. It’s less interesting. Instead, I’m watching Escobar fumble around in some fake prison he made and kill his own men as he goes down. No shit he was going to do that! And still, no gargling throats. I was very surprised his shootout with the Search Bloc and subsequent suicide was not the bookend of Season 1, where the story of Narcos was paced to grow into the complex narrative that gave us the world of Cocaine Cowboys, and Grand Theft Auto: Vice City.

Instead, the storyline in Season 2 has shrunk to fit into the petty, designed-for-binging smartphone era of intended serial consumption. “Binge on your favorite shows,” like that is a good thing. Fuck you, Netflix. That’s an unhealthy behavior, however fitting it may be for a show about cocaine. But I’ll binge on what I want. You think I’m going to watch a show about blow, and call that binging? Why don’t I just pick up a four-pack of sugarfree Red Bull and, while I’m at it, I’ll invite the church group over for the season finale.

Narcos the Netflix series is as addictive as it is insubstantial, leaving me paradoxically disappointed, yet craving more, by the end of each episode. It is the Candy Crush Saga of television series, and they are going to stretch this bullshit out into Lost territory.

Eventually there will come an episode in which Pablo Escobar is going to wake up! …only to realize he’s lived his entire fantasy escape out in the space and time between his brain and his right ear, where the bullet should have already entered at the end of the 10th episode.

And I’ll be there to see it.