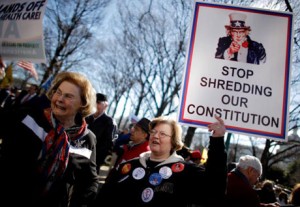 A mob of civil rights activists could change the way a bill becomes law Friday by repetitively chanting slogans.

If enough protesters chant “Nobama,” a key piece of legislation is likely to bypass Congressional oversight to become the first law in American history to be introduced by mob rule.

“I’m going to Washington, and I’m going to fuckin’ throw my sign in their FACE,” Corne said. “I want them fuckin’ ports closed down. You wanna hurt ’em? Go for their god damn jugular. Don’t bitch kick ’em.”

Corne accused viewers of being “pussified non-Americans” and said they are just as bad as those illegal immigrants taking over the United States, raping citizens.

Also called the “American Spring,” event planners said the demonstration is going to be a real barn-burner. If laws change at the whim of mob rule, then America will take one giant leap toward a greater Democracy.

4 replies on “Bill could be chanted into law”

A recent hatesec quote, ‘I hate the chronicle.su’. Well the feels are mutual, son. Ps-Just kill yourself by drinking bleach & setting yourself on fire and livestream for the lulz. What that’s already been tried & failed. Has any one tried suicide by drones yet.