No thought or effort, whatsoever, was put into this. 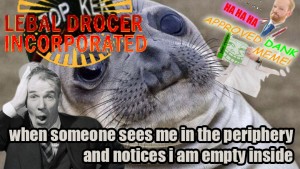 These are the difficult questions our loved ones struggle to answer and which cause the most friction, even as you seek to better yourself. Until you seek professional treatment for your addiction, however, the problem is not what we might consider a “real” problem. And the only reason we ever have real problems is because we are real people. Problems are relative, nothing is real, and addiction is only trying to fill a hole that’s there whether the addiction exists or not. You can put anything there: people, machines, drugs, the Internet. All problems are formless, shifting nebulae. No configurations. No automatic resets. A condition that should not be — an error you must resolve.

From Her black maw, a monster emerged within him. Planted by her doubts, watered with insecurity, the creature grew like a mold, until one day its stench could no longer be ignored. There were always signs – markings along the trail – suggesting something might not be right. The monster had begun to stir. Now along with stench, there was movement. Now, there were constellations transfixed upon the ogre, and a full moon had just come into view.

“She’s hot, but stupid, right?” and the monster winced. “She looks good in her underwear, and I get to see them walking around like that.”

Hot but stupid, the animal identified with. Hot but never cooling, and twitter. Watching someone commit suicide.

Seek help (whatever) or kill yourself (whatever) ::returns to listening to Pink Floyd’s Darkside of the Moon:::