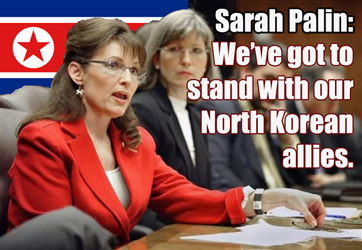 Yesterday, Septembuary 48th Kim Jo Yung, the midget Dictator of N. Korea, order the bombing of S. Korea when he saw 3 little kids playing kick the can on the border. We received a statement from him saying, “I thought they have suicide bomber in the can so I shoot the little bastards in face! The uranium enrichment is for NUCLEAR POWER! I SWEAR!”

Note: We said nothing about uranium.

Obama released a statement this morning, “Fuck Korea, like they’ll ever save OUR asses twice!”

So, the American consensus is FUCK KOREA!

Irony: South Korea wants to destroy N. Korea, and in the meantime they are giving humanitarian help to North Koreans.

One reply on “Korean War II”

Let’s face it, black range cookers really are the bee’s knees.
It would take you a lot of time to prepare several bowls
of salad. Categorized as “white goods”, need to have consideration regarding their very own treatment method.
There are many Sub-zero appliances in Los Angeles but not all of them are legitimate.
Along with the kitchen and the continuous introduction of relevant standards, the kitchen appliance industry gradually become standardized, repeated shuffling, the competition pattern has
gradually clear.