ROANOKE, VA — For children, reading or being read to during the summer months is a great way to keep their language skills sharp while out of school and to prevent the dreaded ‘Summer Slide’ into the same ignorance, apathy and mediocrity that is characteristic of the adults in charge.

In an effort to combat summertime ignorance, Lebal Drocer Indoctrination held a Scholastic Book Fair at Green Valley Elementary, where good Christian white children are known to go to school. The fair, held across various cities over the weekend, introduced children to new books for the modern kid, including such titles as Cayden’s Internet Daddy, The Bitcoin That Could, and strategy guides for livestream mumble rapping. 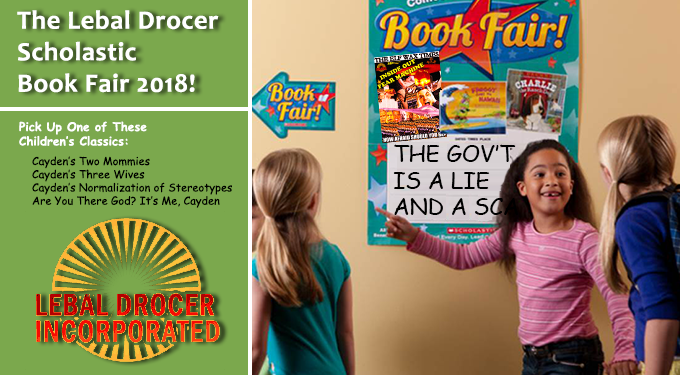 A six-year-old boy named Austin left with a plastic bag full of books and magazines (which is going straight into the ocean).

“We got to read about Derrick’s Two Mommies,” Austin said. “I got to the end and it was nice to see everybody getting along. But I am six. And I could not give a shit about somebody else’s lesbian parents.”

James, a seventh grader from New Bern, North Carolina, said he had already checked out every book in the library pertaining to his interests in UFOs and tales of space genocide, when he finally picked up a title he’d been avoiding all year: Judy Blume’s coming-of-age classic, Are You There God? It’s Me, Margaret.

“On the cover it was some girl praying next to her bed, which – I don’t know – that looks and sounds like boring religious crap to me. All the adults acted like the book is a really big deal though, so I checked it out. It didn’t take long for me to return it. Actually I still don’t know what it was about. All I remember is it was really, really boring.”

James said that although Margaret’s strife felt alien and otherworldly in itself, he appreciated Blume’s insistence on dramatizing the long-winded, bland non-events of his peers, and got interested in other stories about chicks having periods.

“At the book fair I got a book that says Native American women – the rightful owners of this land – would go chill out in a hut during their periods. This was sacred time. Again, very boring, but this could be my new fetish. Who knows? I’m 12.”