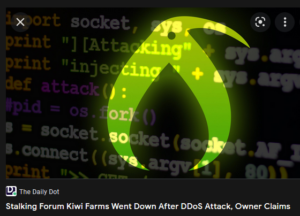 Reporters reached the reclusive and paranoid owner of KiwiFarms Joshua Moon, who said of the outage, “This is an assault on the decentralized internet which I have personally created. Without the freedom to document lolcows and say slurs to them, we’ve got nothing left to laugh at. Nothing at all. My life and many others are now in ruins. We are the real victims, not Keffals, not Marjorie Taylor Green.”

A KiwiFarms moderator spoke out under the condition of anonymity, saying, “Over the years, KiwiFarms gradually moved away from documentation and took a more active role in grooming and manipulating its subjects into ever more humiliating situations, until they finally tricked Chris Chan into committing rape, ruining the show for most fans.” The moderator added, “It was all an inside job. You can call me Rasslin’ League if you want to give someone credit. We do not forgive. We do not forget. Expoct us.”

Kiwifarms trolls project their autogynephilia/suicidal ideation on lolcows they all secretly identify with.If Kiwifarms goes down they have to face what they are, there will be many more suicides than if it was kept up. This is a much deeper ethical crisis than anyone comprehends, who is right to play the judge, jury and executioner for an entire segment of the population? Perhaps they’re highly intelligent outcasts being compromised into lazy reaction, maybe Joshua Moon is in the pay of massive intelligence and is constructing the perfect honey pot for the next generation of MENSA addicts.I don’t take a side one way or another personally but I do think we need to seriously consider how gay and special these people are.

Like how they left out that he was arrested for sexual abuse of his own mother. LOL