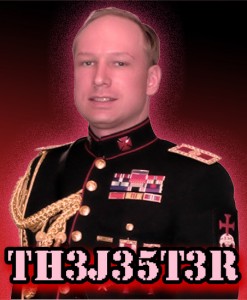 Anders Breivik and th3j35t3r are both extremely conservative Islamophobic terrorists, willing to target any groups who enable or promote acceptance of Islam. On Tuesday, th3j35t3r attacked web sites and Twitter accounts belonging to Lulz Security in his never-ending struggle against Islamic jihad. Like Breivik’s attack on the campers at Utoeya, th3j35t3r has since explained this action by linking LulzSecurity.com with the spread of Islam.

DDoS attacks infringe on the fundamental human right to a free internet and can only be justified through the same twisted ideology that led Anders Breivik to kill nearly 100 campers at a youth retreat for the Labor Party of Norway. That is, the publicity Breivik and th3j35t3r hope to garner for their cause justifies their horrifying actions.

Another similarity between Breivik and th3j35t3r are their laughable and lavish methods. Breivik spent thousands of Euros equipping his rifle with a red-dot sight, high-end clips, a custom stock, specialized rounds and even poison to inject in the bullet tips. In all likelihood, th3j35t3r spends thousands of dollars on computer equipment he believes is necessary to carry out his attacks. We have every reason to believe that th3j35t3r is in fact a Mac user. After each DDoS attack, th3j35t3r treats himself to a three course meal in a high class restaurant as Breivik did during each stage of his bomb-making.

Breivik was also an admitted steroid addict, using the drugs to keep his morale up. He often lifted weights and wrote of his improving physical condition. It does not take a large stretch of the imagination to envision th3j35t3r, in the midst of a DDoS, lifting weights and injecting himself with a cocktail of steroids and testosterone.

Breivik enjoyed World of Warcraft, but it is more likely that th3j35t3r only plays Call of Duty, seeing as he’s an ex-marine. In all likelihood, th3j35t3r has killed more Muslims than Breivik, although each supporter of multiculturalism killed by Breivik counts as only 1/3 Muslim.

6 replies on “What Anders Breivik and th3j35t3r have in common”

I wonder if anyone has suggested to the guys over at PakNationalists.com or newlifeestl.com to report th3j35t3r to the FBI for the DoS. Since he’s denying that now after publishing it and then removing it from twitter when the mistake was realized.

Maybe they will investigate him with the same amount of vigor.

Did jester forget that lulzsec posted this last month?
Why would he collaborate with such evil people?
I bet his faithful followers would be upset.

The problem with Jester is he targets pointless “terrorist” websites with DDOS (doesn’t hack them …, he should grow some balls and his the UK military websites and the USA websites after all they are recruiting all those young men and women to go kill brown people in Afghanistan/Iraq/Libya/Somali/Pakistan/Yemen, but that wouldn’t fit his perfect world view.

portrait of a fag