BARCELONA — Fans mourn the loss of antivirus magnate John McAfee, who died early Sunday morning at his secret houseboat on the Mediterranean Sea, near Spain. 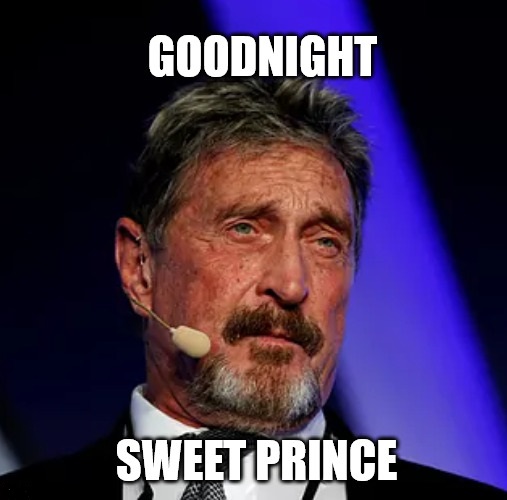 John was pronounced dead on Wednesday, June 23. Cause of death was listed as “drowning associated with piracy in international waters,” concluded by a burial at sea. He was 75.

John is survived by his wife, Janice McAfee.

Reports have emerged of John McAfee supporters installing McAfee Antivirus on their machines in his honor.

Because no will was entered into the public record, John’s charity for underprivileged children online, The Little Johnny Foundation, will dissolve.

Remaining assets are to be turned over to Deep State International for future disbursement to an undisclosed bitcoin address.

John, who grew up in Roanoke, Virginia, successfully killed a man in Belize but would later suffer from a damaging tax scandal spanning the world wide. When John recently failed to fake his own death, he was forced into a deadly game of cat-and-mouse, prompting Spanish conspirators to launch pirate ships in his general direction. Now, today, a wife is without her husband.

9 replies on “Dead and Bloatware: John McAfee dead at 75”

SHUT YOUR WHORE MOUTH BARRETT OR HELLBOY IS COMING FOR YOU NEXT!!!

Shitty, I mean pity. So who next in teh dead pool, kirtaner or bb?! It’s bloody race to the death ( ͡ಠ ͜ʖ ͡ಠ) #hotshotz

i want jello shots & puddin pops at my funeral, js

Anthony Weiner back on Confide, app he used in underage sexting scandal
Weiner was sentenced to 21 months in prison in 2017 after pleading guilty to transferring obscene material to a minor

When asked by Page Six if it was genuinely him back on Confide, Weiner – who pleaded guilty in 2017 to transferring obscene material to a minor and was sentenced to 21 months in prison – confirmed it to us via e-mail.

“Yeah I got this,” he wrote, adding a message from Confide reminding him to view his unread messages.

‘Life is weird, because I had a beloved teacher who died of a series of ischemic strokes, I had an aunt who died from aneurysm, and a close family friend who died of a major stroke. I guess it’s like they say, different strokes for different folks’
Don’t be bitter, & there’s worse ways to died. Fuck I’ve lost over 100 ppl (stop counting at 60 around 7 yrs ago) in my life, so my condolences hatefucker.
I c ur now on the highway to hell. Maybe once u reach the mountains & settle in, u & the trout man can bang out another unaward winning podcast.

ps- oh did y’all forget how to write