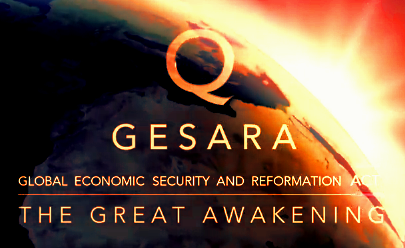 INTERNET — In a startling turnaround, QAnon announced in a ‘breadcrumb’ that the liberty agenda of GESARA NESARA will soon come to replace the corrupt zionist financial cabal and destroy the Deep State in climactic and total “reset” of the economy, providing each and every citizen with monthly $5,000 payments and massive expansions of Social Security payments to the elderly.

For decades, the Deep State has SUPPRESSED the NESARA GESARA foundations by PERSECUTING their adherents as scammers and fraudsters.

In 1994, Patriot Clyde Hood formed the Omega Fund, which would help underwrite a TOTAL ECONOMIC RESET as outlined in the NESARA bill written by Professor Harvey Barnard. However, the Deep State soon SUPPRESSED this investment fund, and were later unmasked by the Dove of Oneness, Shaini Goodwin. Hood served 12 years in prison after admitting to the scam, to avoid exposure much like Michael Cohen, Paul Manafort, and George Papadopolous.

Hood has since rebuilt the Omega Trust and one day plans to repay all investors triple their promised returns and take down George Soros and the IRS forever.

QArmy White Knight insiders say the Rothschilds will be forced to pay back what they’ve stolen from the Omega Trust, allowing American citizens who also bought into the Trust to receive back Prime Bank Notes in the amount of their deposit, taking back not only the power to the people, but the money used to restore that power.

The NESARA and GESARA legislation, which was secretly passed on September 11, 2001 at the moment of the collapse of the South Tower, will only go into effect once it is announced. The Deep State has so far been successful in suppressing the secret law, but with the help of Q Anonymous, Donald Trump plans to Announce NESARA GESARA before Valentine’s Day, putting a final end to the Criminal Deep State IRS. Until that time, QAnon suggests that QArmy should avoid asking too many questions, keep calm, and Trust The Plan as it unfolds. The Storm has already passed. Russia is Done. Collusion is over.

INVEST IN YOUR OWN ESCAPE

To ensure so-called “governments” can’t eavesdrop or track payments to the Omega Trust, a person once needed to wrap their money in tinfoil before sending it through the Deep State mail system. Now, Cryptocurrencies have solved that problem, and you can invest bitcoins directly into the Omega Trust, courtesy of Lebal Drocer, Inc. here:

All proceeds will be directly invested in Gold and Silver immediately upon receipt, ensuring an end to inflation and a 1,000x return as your investment is redistributed.

Your bitcoin contributions, besides being used to buy up global corporations who lord debts over you to control your thoughts, are spent fighting for the freedom of truth activists such as Julian Assange. For example, funds donated to the above address are being used to provide legal representation in the case against Dr. Celeste “The Dove of Singularity” Troubadour, who was jailed after 9/11 for trafficking cancer curing medicinal marijuana.

His case, as it plays out in secret FISA courts, is one example of many how the Trust is being used to fight for you, to reset the financial system, free every last American from debt, and build the Wall. When NESARA GESARA resets the global economy and all debts are forgiven, the Trust’s vast Gold and Silver assets will mean prosperity for everyone, especially you. The Swamp is already Drained and your bitcoins are turned to Gold, just as ancient Alcehmists always Dreamed.