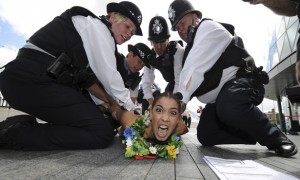 Richmond, Va. — Knowledge is power and it must be checked, according to gender studies undergraduates at Virginia Commonwealth University in Richmond, Virginia who say the material to which the university has exposed them triggers PTSD relating to past incidences of vicious cyberbullying they have experienced in their lives.

The young womyn, who have asked not to be named because capital pronouns impose prejudice, say the “mental rape” they endure from their VCU education even violates the sanctity of the controversial and rarely cited Title IX anti-rape law that makes rape in a place of learning extra bad.

Humanity’s history of war, genocide and slavery challenge the precious and unique nature of VCU’s fragile, recovering victims of the patriarchy. And it could happen to you, says one womyn.

“I was raped by Troilus and Criseyde’s codependency,” the person said. “Criseyde lived under the patriarchy and Chaucer, whose name is the root word of chauvinism, killed Troilus just to make Criseyde look bad. She had no choice but to cheat on Troilus. The patriarchy cheated on itself, if you ask me.”

Feminism is hated because women are hated. Anti-feminism is a direct expression of misogyny; it is the political defense of women hating.

What about my sexual market value, which is spiking?

can we watch commanderX get waterboarded!? askin’ for a friend.