Today OP posted an older chronicle.su story to reddit, and about two hours ago, it was deleted. I don’t take issue with the fact it took so long for the public to pick up on this story [Editor’s Note: who’s kidding who, like I give a fuck? I take issue with nothing. Stop oppressing me, shitlords!!!!]

That’s fairly typical at every level of journalism. Information might become available instantly, but it can take ages to disseminate. This is normal, especially when so much technical jargon is involved.

But before we tear down reddit for being a POWER-LOVING SHITHOLE, I would like to point out that I also really enjoyed some reddit users’ reactions to my material, a lot of it seen for the first time by more than 30,000 people.

But on down the page I noticed complaints, with only a few upvotes, suggesting that because chronicle.su is “satire” the story should be taken down without any respect to whether the actual content of the story was true. Nothing is ever funny, just because it’s true, right?

Now, when I wrote the story, I expected the news about DEITYBOUNCE and GODSURGE to take a while for the public to catch on, because it requires at least some familiarity with system and network security to understand, even in the simplest of terms. Also, I knew that because I delivered the story with that Internet Chronicle-brand gusto, people would never actually believe it, even though every word of it is true. But I did that on purpose, because I do this for myself, and all that matters is that I know the difference between bullshit and reality.

However, after 18 months, I finally got to see the conversation unfold that I wanted to see around the particular subject of ARKSTREAM: there were upvoted discussions around actual facts contained in the story.

But as soon as I saw we had hit the reddit frontpage, I knew the story would be deleted not because it was untrue, but because chronicle.su is a place where even we, the writers, don’t know whether the next story is going to be Onion-oriented satire, factual news, hard-nosed political commentary, or a combination of truth and joking, seasoned for effect with convenient quotes by nonexistent people.

I was on the phone with kilgoar when I said, “You know it’s going to get deleted, right? People hate seeing us succeed.” I guess it’s because we do whatever we want to do, and we have fun, and they’re jealous equally of our dank memes, Internet pussy and unfathomable political power.

Seriously though, people hate us because they think running an Internet Hate Site™ is easy, like anyone could do it. And they’re right, it’s very fucking easy after you’ve done it for 8 years and know what you’re doing. [Editor’s note: Not to mention, WordPress is a fucking joke.] But they didn’t start their own websites; in fact, most everyone – including yourselves – are losers who never actually did anything with their boring-ass lives, so you have to shit on everybody else and drag everyone else down. The only way you know how to process the vibrant, beautiful world we live in is through your gray sunglasses like you have it all figured out, and all you’ve figured out is SHIT, so the whole world looks like shit to people like you. I know this because I was you. You either grow out of it or grow into an old bitter turd, stinking up the room. Reddit saw the neckbeards remark at the end of my article and instantly hated it, because only a redditing neckbeard would ever suggest a story be taken down from reddit, a content aggregation site known for its commitment to accuracy and integrity.

My article was a combination of straight news mixed with obvious commentary for spice. So the moderator of /r/technology really didn’t do his homework, electing instead to answer MODS MODS MODS, GET IN HERE. ‘Finally, a chance to feel useful!’ thought the reddit moderator. ‘This will validate my existence!’ And so with authority and conviction, he deleted my true, factual story from the top of the technology subreddit, because The Internet Chronicle is a satire news site. Yeah, you moderate a fucking subreddit, big deal. The Internet Chronicle doesn’t belong on reddit anyway, because reddit is a shitty website built on a shitty, exploitative premise. And let me tell you, it was a real battle of superpowers today, ladies and gentlemen. It was real barnburner.

There might be some syntactical disagreements with the order of events in which Ross Ulbricht’s activities were finally uncovered, but that doesn’t make the article wrong. In fact, when the news broke of Ulbricht’s arrest, this information was still totally unknown, and the online usergroup he contacted for tech support may well have led to his discovery, since only a handful of people were using those commands online, and Ulbricht’s commands and the way in which he requested help for them served only a very small set of specific purposes, namely the secure movement of information along two unique online databases of illegal buyers and sellers.

If you’re curious, that was really him on the website, and the other users only realized it well after he was arrested. I know this for a fact because I participate in online discussion. In other words, lurk moar, faggots. An actual, useful moderator on the tech forum later confirmed the request was made by a single-use Tor user. If I wanted to make something up for laughs, I would not have been so dry as to point to an unknown website to make a remark about an unknown line of dev code. You fucking unknown tryhards.

But I’m sure you’d rather buy the FBI’s explanation, anyway, since you’re the kind of person who gets his news from reddit comments.

Now, how did we appear at the top of the Technology frontpage? Well, it turns out OP is a pretty cool guy, who proves … basically the entire point of this website. 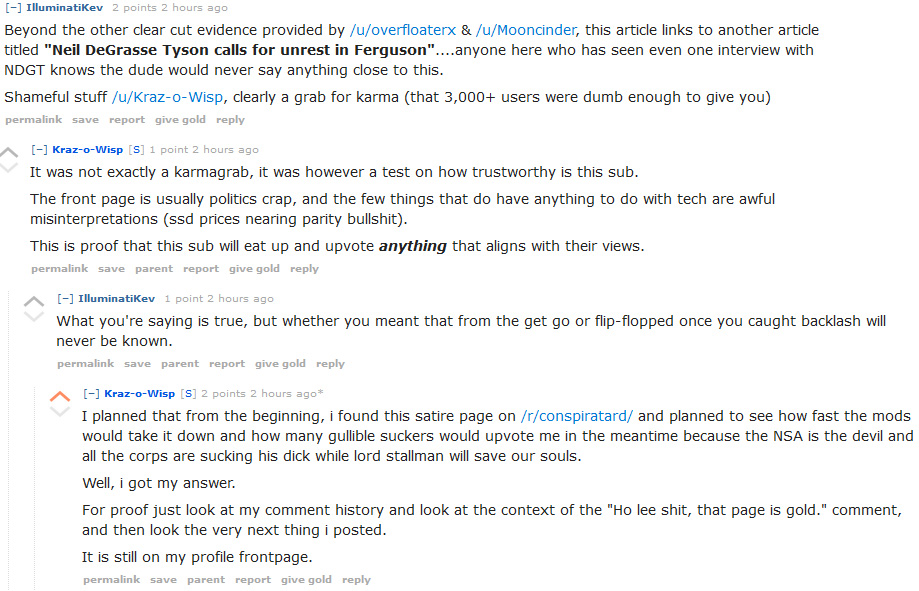 And the point is you’re a bunch of gullible, mouth-breathing idiots, who are willing to suck any powercock that comes within inches of your open lips. Whether it’s wiki-power, Snowden-power, military-power, police-power, upvoting-power, Chronicle-power, or just plain old power-power, you’ll still suck the end of that dick and swallow the seed that makes you sick, because all you want is a taste. A tiny little taste of that power.

Well, here it is, so drink it down, MOTHERFUCKER. Go fuck yourself, reddit.

This is The Internet Chronicle, and you’re reading chronicle.su.

num, num, num. Oh, give it back, Daddy, let me suck the powercock. I almost tasted it. I can smell your powercock, Daddy, just let me have a little taste. Give me a little tiny taste of powercum, Daddy. I want to taste it.

The Internet Chronicle is a Powercock Publication, brought to you Proudly by Lebal Drocer, Inc.

We are behind every iteration of the world superpowers.