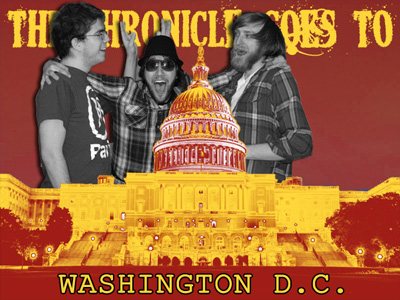 Washington, D.C.–Five members of the chronicle.SU staff encountered a white Muslim man praying to the East Monday, in the middle of Pennsylvania Avenue, directly in front of the White House. Before him sat a pile of bags and at exactly 5:30 p.m., he stood mechanically from prayer and began fumbling with them. The cops watched him intensively and gathered vehicles around the area, as well as establishing police lines.

Spray-paint on the back of his jacket explained his belief that Allah is the only true God.

Federal police in a four-wheel drive vehicle arrived on the scene and were given sealed orders in orange and white plastic baggies by one in a group of bike cops. They appeared immediately out of nowhere with one red box and gathered around the driver side window to exchange orders.

The very next thing to happen was the appearance of Tyler Bass, chronicle.SU journalist and Washington insider. He warned the men to get away from the scene, and subsequently led them into something not all that much different.

Chronicle.SU is banned from the website AnonNews after being gradually purged from their system. This website is so hated, it is not even allowed on the AnonNews hate wall. Even though there is a place specifically reserved for the most hated external sources on the internet, Chronicle.SU is so hated by their moderators that AnonNews even took it down from there.

This is relevant. Chronicle.SU considers that move a win for the cause in general, and applauds AnonNews for its predictable FOX News style censorship, imposing ignorance on its readership, and anyone interested in the democratic sharing of knowledge and information.

Chronicle.SU was then accused by their readership of being Backtrace Security, and even the government. Then, were accused by the moralfags as being a psyche-out operation by the government (as if the NSA would really send agents into a public forum and go “booga-booga-booga!” to boast their strength.)

The six men discussed this, walking diagonally away from the White House and into the city.

“I think that’s how lies propagate,” one of them said, ducking suddenly into a hidden bar: The Royal Palace is a strip joint with no cover charge and cheap drinks; but, there is something of a catch.

After a couple of drinks, an angry dancer came by and insisted they tip the next dancer (or get out, judging by the look on her Mongolian hate face.) It seemed something had gone terribly wrong for her. All at once she’d gone from a small-breasted seductress to totally repressive and frizzy-haired, silently asking onlookers for tips, one by one, with the shake of a hand. She looked tired and angry.

“This is what it feels like to vote,” Old Brutus said, offering up an empty left-handed handshake to the woman. She slithered nastily and hissed about tips, as AnonNews flashed through his memory – How it feels to be voted for, only to see your articles deleted by some zit-faced overlord during his microcosm conspiracy theory of actual real-world politics. How pointless voting can be; to shake an empty hand; like the U.S. Government, AnonNews ignores the majority to pass along the agenda of a privileged minority.

After some bad vibrations, we felt very unwelcome and it became apparent that it was time to leave.

The six editors, writers, musicians and artists jiggled drunkenly down a gray, windy road and into a blues bar. Bouncers at the door said one of them couldn’t come in, because he had no ID. They said, “Good luck finding somebody to serve that guy! Everybody cards in this town.” Three members of the group went inside. Tyler Bass, Kilgore Trout and Old Brutus went next door to a coffee shop that also served drinks.

The waitress there, Taylor, was drunk; and wanted nothing from Trout but his dick.

They were finally safe, finally seriously drunk, when Anonymous came back up in discussion. Bass couldn’t believe the Chronicle’s influence on the dwindling moralfag community. He said their age and visibility explains the splintering of their small group and the Chronicle was right for making note of the factors at work, even calling out the United States Government, who he said had been at this subversion game since the Sixties.

“Behind every action is an emotion,” Trout said, “and the response by AnonNews to delete our material is one of fear, and determination to ultimately disallow their readership access to dissenting facts and articles.”

Chronicle.SU is the only Internet news source with connections to the top, in coordination with Wikileaks and government access nodes using only the finest in journalistic practices. Siding on civility and honor, staff writers seek out truth via phone interviews, contact with government – and religious – officials, even military personnel on behind-the-scenes behavior and protocol, we deliver truth, free of charge, at no cost to anyone.

The Anonymous News “Network” is run by one guy, claiming to be V from the movie V For Vendetta, or the poster boy MoralFag because he wants to be that guy from the movie.

Sources say it wouldn’t be a fool’s wager to believe the owner of AnonNews isn’t behind this new website, which simultaneously runs advertisements and asks for donations. It’s actually worse than AnonNews, though, because all the [propagandist] material is produced by one pathetic guy.

His advertising revenue comes from those “invest in the gold market” scams and large corporations like Pledge.

Racketeer Influenced and Corrupt Organizations Act (RICO) filed a lawsuit against S.C. Johnson & Son, the parent-company of Pledge cleaner, for filing fraudulent tax documents and withholding millions of tax dollars from the federal government. Pledge said “fuck the people,” and exploited tax loopholes, and now props up Anonymous who they know will do that for them.

Why sell Pledge here, at Anonymous News “Network?” To make bombs? No. You can’t make bombs with Pledge. Pledge appears as a search term because Google Ads pick up on Anonymous ideology and matches the volatile cleansing agents with the whitewash fascism of Anonymous.

“V,” like AnonNews, is clearly connected to the government, or some kind of corporate copy-pasting of blogger voices to make cents at a time from 2,000 Google Ad boxes on duplicated platforms across every message and medium available to a multi-tasking god of machinery, the NSA Supercomputer – while simultaneously deteriorating what little integrity is left of Moralfag Anonymous.

Anonymous News Network is the first of its kind – a cog in the automatic money machine, leeching off the main pulsating cable of cash into and out of Google. While begging.