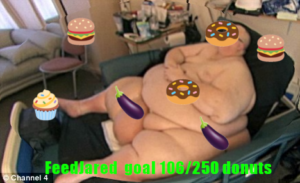 BOONE’S MILL, VIRGINIA — Police drew a thin blue line across Boone’s Mill, early Friday Morning, as they raided the Boone’s Mill Church of Biden. Minister Whitey Teylor, who presided over a Satanic rape baptism in honor of President Biden, was shot on sight after police were heard shouting, “He’s got a gun!” Teylor survives in critical condition at Roanoke Memorial Hospital, where he is awaiting weapon charges.

Chief of Police Freddy Jaksov said during a pseudoevent that members of law enforcement are scheduled to enter his hospital room and place a gun in his hand, proving his fingerprints were on the murder weapon.

Refuse of Biden merchandise filled Boone’s Mill after police officers tore down cheap cardboard signs littering the church’s exterior, by driving through them in a department issued Mercedes-Maybach S 680. Several mysterious children were saved from so-called rape baptism at the hands of demonic Democrats. However, upon learning these children were illegal immigrants, police promptly and abruptly put them into cages, a practice that thankfully began under Barack Hussein Obama, but that the police nonetheless support.

“The police are animals,” Teylor said. “Cages are the only thing they know.”

Reverend Teylor is charged with “shitting up” Boone’s Mill, where people are already too ugly, following with an ordinance passed by the drunken city council late Thursday night. After the raid he is facing much more serious charges. He is facing 57 charges of conspiracy for the satanic communist pedophile network and 91 relating the the abuse and smuggling of illegal minors which, according to chronicle.su pediatrician Dr. Angstrom H. Trusmeboy, is not that many.

“I’ve seen a lot of trafficking,” Trusmeboy said. “There isn’t much demand for these ones, it’s a niche market, and he’s going to take up space here in my shop. Best I can do is a thousand and five, firm.”

Jaksov took the condom off his baton, and threw it on the ground at his feet.

[UPDATE: Fingerprints identified as belonging to Teylor were found on the murder weapon discovered in his hand by police who, by chance, found it on his person as it left their position into his right hand. According to sources inside the global collective unconscious, he is now fucked.]

DALLAS — John F. Kennedy Jr. appeared briefly in Dallas on Tuesday, as predicted by Qanon, and was seen waving to crowds from the sunroof of his bulletproof Cadillac before he was shot in the torso and carried off in what onlookers described as a black, deep-state ambulance.

He was smiling, “so happy,” and looked like he hadn’t aged a day in 22 years, said Maria Sabinski, 47, who showed up to witness the ‘Dead Kennedy’ come out from hiding.

JFK Jr. was expected to announce Trump’s presidency, dethroning Biden, and explain why everyone thinks he is rising from the dead.

“We heard a crack from the book depository, then two shots rang out from a grassy knoll,” she said, gesturing in each direction.

“His expression changed. He looked surprised, then pained, as he clutched a spot in his belly. They took him out of one black car and put him in another. Then they all sped off together, like a bat out of Hell.”

JFK Jr., originally believed by uninquisitive NPC sheeple to have died in a plane crash over the Atlantic Ocean in 1999, was expected to declare Donald Trump as president.

Mere seconds before the world-shattering announcement, he was brutally murdered from the old book depository building, a security blind spot that has plagued presidential motorcades passing through Dallas for more than half a century.

Barry Knudsen, core disciple of QAnon and Lieutenant Digital Soldier, told reporters, “We are all QAnon, we are the main characters in this story. Where we go one, we go all.” He gestured at the crowd of weeping fans, “You see these guys and gals here, they aren’t just sheeple hiding behind their computers talking shit, like demoncrats. Look at their faces, they really want to protect the children. They really love the children. They’ll do whatever it takes.”

All mention of the incident was scrubbed from social media. QAnon fans who shared screenshots of deleted posts quickly faced system crashes after which their devices would no longer boot and upon close inspection were wiped of all data.

Dallas Sheriff Harold F. Gloasen told reporters, “We had no reports of a shooting, of shots fired, nothing. There were no permits issued for a motorcade through Dealey Plaza, and certainly no murder case for the long deceased JFK Jr.”

A mother, who asked not to be named, was out shopping with her 1-year-old infant when she passed by the confusion.

“First I was like ‘are they saying the Pledge of Allegiance right now?’ I didn’t even want to walk by them, but there were so many people they were blocking the sidewalk,” she said. “That’s when I saw John F. Kennedy Jr. hanging out of a limousine. I just went ‘huh, I thought he was dead.’ Now I guess he really is.”

The Biden Administration refuses to acknowledge the high-profile assassination of a political leader that until now, was presumed dead.

Our prayers are with the Kennedy family as they attempt to find out which underground deep-state human containment facility is processing the corpse of JFK Jr., the Herald of Truth.