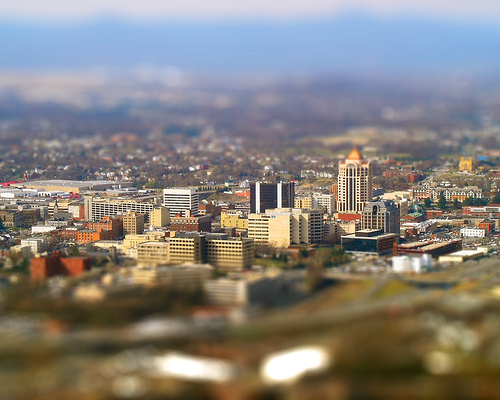 Roanoke is situated on the Roanoke River, which forms a valley in the Blue Ridge Mountains of Southwest Virginia. The Appalachian trail and the Blue Ridge parkway pass through, bringing in tourists. The Mill Mountain star, a giant neon light, acts as the centerpiece to the city. The historic architecture of the downtown area is quite charming, especially the Hotel Roanoke’s Tudorbethan styling and the Gothic spires of St. Andrew’s church. The newly built $66-million Taubman Museum of Art features modern design reminiscent of the Sydney Opera House and is home to over 2,000 works of art. Roanoke has also spent $32-million on a recreation center, convenient to the Blue Ridge Parkway. Nearly $8-million was spent renovating the City Market building, at which point most of the old food vendors were driven out by an increase in rent. Over $35-million will be spent to widen a stretch of road which is less than one mile in length.

In the past few years, Roanoke has seemingly had its hands on more money than it can spend. The building projects are a sign that Roanoke is doing well. Still, corners have been cut. Glaring problems have been ignored. Childhood memories have been destroyed. Roanoke’s Explore Park, a living museum and window into history, was closed in 2007. The Explore Park was a truly charming destination where visitors stepped back in time to a working blacksmith forge, a native village, and all the trappings of the colonial era.

Roanoke does not seem to value its natural beauty, either. Plans to allow a Chicago firm to place a wind farm on Poor Mountain have been met with defiance from nearby residents, but the County Council has continued to pave the way for corporate interests by loosening restrictions on the placement of the turbines. Although the majority of Roanoke approves of the wind farm, opponents are concerned the farm will destroy the area’s natural beauty and kill hundreds of thousands of birds and bats.

Despite all the extravagant construction projects designed to attract tourists and line the pockets of building contractors, Roanoke has shown some small appreciation for natural beauty. Roanoke’s greenway has provided a bike trail along the beautiful Roanoke River which has become an instant hit with Roanokers. Development of the greenway has not, perhaps, drawn enough attention to the abysmal state of the Roanoke River. Although the river is filled with litter, industrial equipment and sewage, Roanoke does not seem interested in spending its dime on cleaning things up.

Roanoke spends a lot of money on cockamamy schemes to draw in tourists and preserving natural beauty is, at best, an afterthought.

2 replies on “Welcome to Roanoke, Virginia”

Only you guys would be upset to see a historical, colonial village, that was home to countless field trips, be closed. I pray everyday to Atum Ra that the ones here will be closed.
Natural beauty is, however, too often an afterthought. I guess with all these crazy gizmos the kids have these days, rolling hills with grass uncut, dandelions, rabbits and birds playing as if the city directly adjacent wasn’t responsible for the near extinction of their species, and that one big tree at the top of the hill, all together at around 7:30 in the fall, just doesn’t have that much appeal; maybe because they haven’t seen that…them gizmos is awfully excitin’.
xbhgd.vk48qhgd