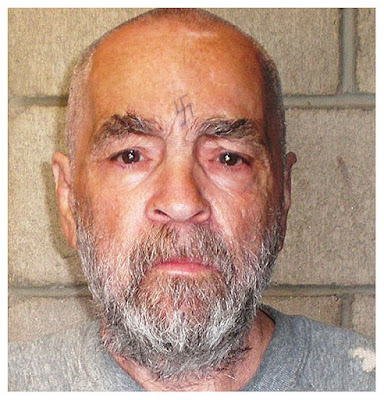 Charles Manson: due to be released in the year 2012, the world-famous serial killer is up for his twelfth parole hearing on the final notch in the Mayan calendar, and he’s already announced new plans to get an acid-washed desert cult underway in the hope of advancing the great holy war of ideology.

The aging mastermind behind the ‘Helter Skelter’ killings spoke to the press earlier this morning, commenting on the ups and downs of his career turning points. The sexually-powered messiah commented on prior failures, saying “I’d like to see more chainsaws being rammed into peoples’ assholes.” He went on to include a tirade about the Beach Boys and his unrelated involvement with hypnotism and mind control techniques, whose details will not be reported here.

As an order of natural law, Yoko Ono should not have an utterable name. She was instead a device planted by the Manson Family to destroy the morale of the opposing faction of insanity, the other stoned acid culture who are not famous for brutal killings, but instead flower-prints, tie-dye, and being sold in Bob Dylan’s Pepsi commercials.

Japanese people love beetles. Yoko Ono did not love Beatles. Buffalo Wild Wings is having an initiation tonight. Whoever dies in the parking lot wins the store.

Obama promised a new day in US Irania relations. Iran’s nukes will be dealt with through negotiations, because everybody owns nukes anyway so who gives a fuck about controlling them anymore? “If the US will stop meddling in other countries’ affairs, Iran will change.” -Iranian spokesperson. It is already rumored that Iran has figured out a way to use nuclear power to travel back and forth through time, and so went four weeks back in time and then two years into the future and assassinated Barack Obama in the future, by way of the past. He has both already been dead for two years and has been our president for two months.

If Manson is released, he becomes automatically eligible for nomination to presidential candidacy behind whom we can all support monetarily and politically, and interestingly competitive with regards to Sarah Palin and the GOP. Write your local congressman, and tell them to delve into Manson in 2012, for heavily-taxed but outstanding health care, so that we may amend the Constitution to support senseless killing and talk about the good old days of murder, when it was available only on the black market. Those were the days. Let Manson take you back to the past, in the future!

“Whoever dies in the parking lot wins the store.”
(lawl)

I wrote this story while homeless. And I think it shows.