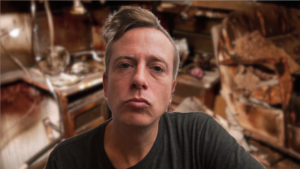 Barrett Brown contacted Internet Chronicle, Saturday, demanding an urgent interview after recent comments about fake transexual activists caused a stir among the digital activist community. Dr. Angstrom H. Troubador spoke to Brown, who was visibly seething and high on synthetic drugs first developed by John McAfee, which have put him into a state of perpetual social media meltdown.

BB: I haven’t done any activist work in a decade, so no. But also yes, your readers can get in contact with Pursuance on twitter if you are looking for some powerful new legal drugs that will peel back everyday reality and reveal the despicable dark web network of Peter Thiel, which is penetrating literally into every mind in the activist community.
Dr. AHT: Thanks Barrett, this has been an incredible waste of time. While we have a high regard for our readers, I’d like to warn them off of your drugged out narcissistic rage, which has become a real waste and a shame for everyone in the community that it has touched. God Bless, and Happy Easter Barry.

An Hero …. and why yes, I am suicide troll, just ask @6 & Kevin. And both Barrett & Kirt are works in progress. Thankfully they constantly self-medicate, soooo time is not on their sides.

‘Finally, the letter appears to call on King to kill himself, “King, there is only one thing left for you to do. You know what it is. You have just 34 days in which to do […] You are done. There is but one way out for you. You better take it before your filthy, abnormal fraudulent self is bared to the nation.”’

BUT is he dead yet? Asking for a mutual ….