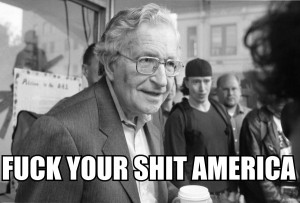 Noam Chomsky said “society is to be dismantled and replaced with nothing by sundown” in a recently typed order to his black bloc legion.

Lebal Drocer attorneys have blacked out all windows and severed communications from the outside. Through a one-way radio, Raleigh T. Hatesec barks orders to a pig army, starving for his attention.

Armed gunmen are closing in on the premises from no general direction, really – just gunning for power pigs and capitalist pimp hustlers – and they threaten to take over the means of production!

What is to be done about these unapologetic miscreants? Why, name them on Twitter, I say. DOX THEM into the system! YOU CAN NOT FIGHT THE SYSTEM! YOU ARE BECOME MY SYSTEM NOW.

Make it more so the people we destroy are toxic threats to total disorder.  We’ll herd them into ‘stables’ where things are chill, and totally fine what goes on inside.

That’s what the good men and beautiful women of Lebal Drocer say! And it bears repeating.

The people we destroy are toxic threats to disorder.

This is an erroneous interpretation of pure anarchy. Let’s give it some love, though, for Lebal Drocer, Inc.

They paraded those women out like cats, didn’t they? The beautiful women of Lebal Drocer are rumored to appear on this year’s Soviet Catwalk, новости where Jessica will finally give us a glimpse into the musical number for which she has been practicing since her mother and father put her to work learning violin, at age 4. She, and her people, have come so far since back then.

That’s all for Internet Chronicle tonight. Please join us again as we self-investigate an invented troll crisis dressed as the trolls themselves! KILGOAR Reports LIVE from the inside (of many fine ladies)!

Chomsky said (he said this directly to me): Read widely.

Well, I have news for you, Mr. Chomsky, I’m reading as wide as I can, and the WALL STILL AIN’T LONG ENOUGH.

So not liking this mobile sire of nonfakery

Well wtf do you want?

^Shut it hatefag, AND fix the mobile site or disable it again. It burns like drinking bleach.
Also Craziest thread of the day goes to Louise M. AGAIN. Like this nutjob puts the cray in batshit crazy literally at the end of the day. https://twitter.com/LouiseMensch/status/854826867332927492

Yep, it burns. PROTIP: Related should be below the comments (for starters). The desktop site looks fine but the mobile site needs to DIAF. Js.

The greatest trick the devil ever pulled was convincing the world he didn’t exist.
– Hector Xavier Monsegur
Don’t drone me mate.