Trump said he reached out to chronicle.su to discuss the latest in what appears to be the largest public relations stunt in American history.

Trump clarified remarks made in the “leaked” audio actually were prepared statements written to hype his new book, “Grabbing Pussies.” 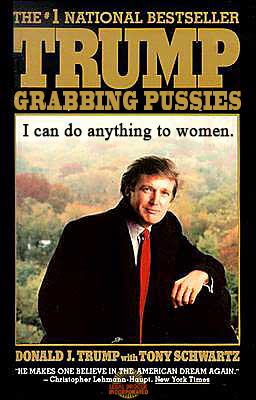 “I wanted people to see how I did it,” Trump said. “How I turned a small loan into a booming political franchise. How I walked right up to the country like it was an ATM, and how I just reached out. And grabbed its pussy.”

“Political favor is not to be sold,” Pence said. “It is to be stolen, like an election. That’s democracy.”

An inconsolable Pence did not attend a function in Wisconsin, and could not be reached for further comment.

[Editor’s Note: Lebal Drocer’s official stance is such that: People are property, and women belong in the crosshairs of male aggression and affection, not positions of power.]

The Billionaire Pedophile Who Could Bring Down Donald Trump and Hillary Clinton http://thebea.st/297inhh

‘Asked at a party earlier this year what it was he and Clinton talk about on the golf course, Jordan slyly replied: “We talk pussy.”‘
THE SMOOTHEST OF OPERATORS
http://www.newsweek.com/smoothest-operators-169868
The irony that Mit Romney might be the only politician in America that’s not a child rapist. #opDeathEaters

7 Ways Russia Is Telling People to Prepare for War – ABC News – http://abcn.ws/2dpx9D7 **listens to the sound of war DUMBS

‘Sitting in the front porch with family: Or, Everyone Tells #hatesec Why They’re Still Voting Trump’
Related … http://www.cracked.com/blog/6-reasons-trumps-rise-that-no-one-talks-about/

‘Last night I recorded a HATE RADIO PODCAST with [email protected] — the public eagerly anticipates its release’
**drum’s fingers anticipation & throws a ?& a ? at you.