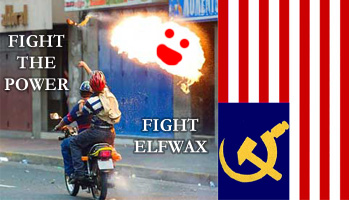 Nashville, Tn.–I guess a lot of you newbs are wondering what’s up with Elf Wax and where we’ve been. I know you’ve been whispering about me behind my back. I will kill you.

Some of us are busy and some of us have started new lives, some of us are continuing old lives that just continuously kick ass. That’s Elf Wax for you. But the main thing here is that we haven’t been posting much. The following is a list of excuses:

Yes. Shit is sort of changing for Elf Wax and we have been late acknowledging this but we really don’t care about you or what you read or tell people or believe in your little mislead hearts because you are sheep and cattle anyway. Oh, and just because I am in another state doesn’t mean I don’t still hate Virginia. Your laws are crooked and your police force is as overbearing as they are stupid. I back up this claim with evidence in our new website and with my mere existence.

But seriously, it’s serious time. And we are seriously avoiding this shit right now, because life is short man and there are about fifteen thousand better things to do than write this drivel you couldn’t possibly think of yourselves. We’re creating different things, writing better stuff, working on our own separate and collaborative projects and mainly just ignoring this place and cruising on the sexting hits. See our tags section for sexts. Sexting is where the money’s at. Changing your minds is where the satisfaction lies. And really, truthfully, honestly, Elf Wax readers are not even our target audience anymore so we politely ask that you dumb shit retards not follow our staff around the internet; or better yet, unplug your internet altogether because you’re probably just wasting bandwidth producing a never-ending stream of YoUtUbE COMMENTZ LOLZ I LOVE KE$HA SHE IS SO DEEP. And get fucked, please. Oh, unless you’re that girl from the insurance commercials with swollen red lips in which case I’ll take one blowjob, but then you must leave as well.