INTERNET — Bernie Sanders dropped out of the race when it became clear that his heavy losses on Super Tuesday spelled an end to any chance at the presidency.

Hillary immediately announced Bernie as her running mate and dug her heels into an increasingly left position. “Bernie Sanders has a point about Wall Street and Socialism. It’s a damn good idea, but it’s going to take more than one compromise.”

This marks the first time since the election of 1810 that a standing Secretary of State has run for presidential office with a senator runner-up as running mate.

“It is as if the stars spelled out the answer,” said one commenter, “Trump is already defeated. Fascism will fade forever, one election at a time, leading to full, all-out communism in the idealistic sense, and not as a repetition of the failed Soviet model. I saw it all laid out in the development of social organizations from Sumeria to the present day in a flash. Tens of thousands of tales foretelling Trump, and the glorious couple, united now, who will defeat him and cancel every one of his emanations.” 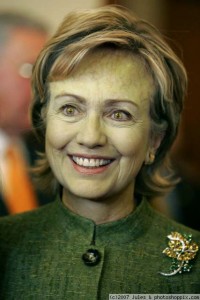 The group raised alarms after a spate of domestic and international terrorism left the economy in shambles and many jobless and without vital services, such as medical care.

Emerging warlords named “Hillary Clinton” and “Jeb Bush” are vying for leadership in the powerful global terrorist organization, while hundreds of millions of American moderates look on in horror as their livelihoods are compromised by terroristic anarcho-capitalists in the Republicans and Democrats.

“I just hope I can still breathe clean air,” said Paula Morrison, a registered Independent voter from Virginia. “Because it smells so bad like bullshit around here you can’t even go to the store without being overcome by it all. Hillary loves the banks, and Bush loves…whatever the fuck Jeb Bush loves, I don’t know.”

An extremist subgroup cling to hope of a fringe Democrat calling himself “Bernie Sanders,” and for some reason are choosing to ignore that he, too, is a powerful ruling elite belonging to the dangerous NGO, the Republicans and the Democrats.

In other news, the war continues.