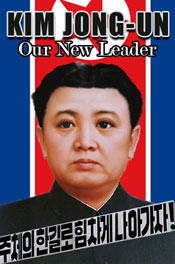 Pyongyang–The most powerful person on Earth, the Dear Leader Kim Jong-il has entered the next phase of consciousness Monday, where he rules the heavens with unforgiving, merciless love. The North Korean leader died of a heart attack.

Kim Jong-il, who recently guest starred in a reality TV show wherein participants traded places with their higher-ups, died of a heart attack during his morning transit to the dogmeat factory. While forced to ride on a train without breakfast to his seventh twelve hour shift of the week, the Dear Leader’s heart stopped before reaching his destination.

Jong-il’s death went unnoticed for at least forty five minutes until totalitarian overlords sent out a search party and bloodhounds to retrieve him for work duty. The dogs reportedly tore his carcasses to pieces and ate most of the remains.

Details are, as yet, unconfirmed because international calls are still forbidden, punishable by death, and must remain within the boundaries of Stalin’s last playground – North Korea, where all people are all the same in the eyes of the Great Successor and peacefully suffer never-ending hell marches in perfect equality.

“Unlike our enemy neighbors,” said state spokesperson Min Il-Suk, “North Korea enjoys a prosperous human cloning program. Which is why we are pleased to announce Kim Jong-un! HAIL THE GLORIOUS NEW LEADER!“

After the collapse of the Soviet Union, North Korea suffered heavily until Kim Jong-il bravely horded all the money in the country and used it to suppress both hunger and uprisings.

The United States has nearly 30,000 troops in South Korea, ready to raid the North, where it is feared Kim Jong-un could likely empty the nation’s coffers into its people, wasting valuable war funds on food or medical supplies for the unseen poor dying in gutters and alleys.

Analysts monitor the situation closely to be sure North Korea doesn’t “try any shit.” There is little to no mention in the weak-hearted mainstream American media of Monday’s short range missile test, whose effects could soon be felt.