Cuthbert, Ga.–A local clergyman molested three boys in the course of one morning shift in the confessional box. On this subject, Pope Benedict XVI spoke publicly, however bluntly, when he told the press, “Join us or die.” The spiritual leader then claimed to be pure energy, and compared himself to “the malevolent moon” whose gravity controls the soul-washing high tides of the Dark Side. More as this familiar saga unfolds. 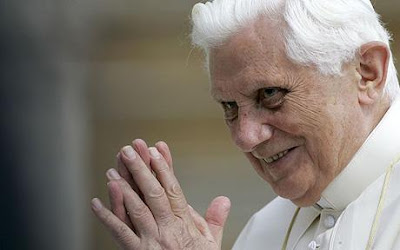 Pope Benedict XVI, seen here coaxing
young Skywalker into the Dark Side
In other news, your friendly neighborhood truth outlet, The Elf Wax Times, has once again raised the bar on excellence in journalism. Elf Wax Laboratories, in conjunction with Big Brother, have staged a three-front media gang-bang in the form of interactive chat rooms and forums that can now be found right here on the very page you’re happily absorbing.
Possible uses for these chatrooms are:
Join your Elf Wax Staff for extended discussion around subjects that you think, or pretend to think, matter most at Lebal Drocer Incorporated (LLC). It’s what the president would do if he no longer had full administrative access to the United States’ confiscated drug supply.