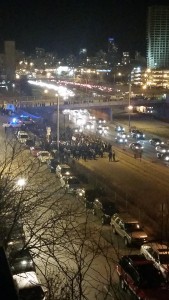 Riot police, outraged by infringements upon The Apprentice stars’ First Amendment rights, massaged their engorged organs from behind the privacy of bullet proof shields, beating at anyone who tried to escape the brutish kettle of primal abjection.

The rapers screeched “White genocide,” and whispered Trump slogans to their victims as a threat.

“You’re going to build the wall, and you’re going to like it, ya Mexican bitch,” one raper exclaimed on rape footage posted on LiveLeak. All videos of the incident were wiped from the internet quickly and a general media blackout continues unabated.

Many offenders took to social media to brag on the hashtag #TrumpRapeCrew. One rapist said, “We went after the Muslims because they must be used to it by now with how theyre [sic] countries are.” Other commenters hopped on the hashtag, connecting the event to the migrant rapings in Europe, “Whites aren’t just going to let themselves suffer genocide by the rapist hordes of muslim migrants. We’re finally raping back.”

The riot police handcuffed each rape victim as a single team of paramedics attended to the grievous wounds.

One Mexican, lying in the street and bound in zip-ties after an apparent attack, cried out for water.

“Get this…Mexican man some water, he’s dehydrated,” a paramedic said. “And he’s Mexican!”

A fair-skinned female medic unscrewed the lid of her canteen, kneeling in the grass at a reasonable distance from the brown-skinned man. She scooped up a pile of fresh dirt and added it to the draught.

“Here, it’s ready for him,” she said, and screwed the lid back on tight. She slid the canteen across the pavement to her partner. “This is how they drink it.”

The burly blonde EMS reassured the victim, pouring the sandy water into his savaged throat, “You just don’t know any better. And now you’re under arrest for disturbing Donald Trump’s free speech.”

The EMS clipped a police badge onto his navy blue medic uniform. Shocked eyewitnesses tell reporters he then tased the subdued victim in cold blood before leaving the scene in an armored vehicle.

Reporters noticed a wooden box – a coffin, apparently ripped out of a funeral home during rioting – with a sign attached to the wall. The sign read “We are not rapists” and had a hole cut in the center of the board, through the letter ‘o.’ Somebody was watching them through the hole. A brown iris darted, watching for attackers.

Reporters heard a muffled, forced cry from the box, “Trump was right.”