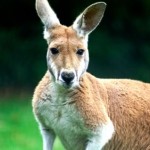 Hi, I’m a kangaroo and I’ve been hanging out at the Bradley Manning trial since day one. Maybe you noticed me standing between Lind and the ever-contorting face of Staff Sergeant George. Anyway, I hear that a lot of you out there — yes, I’m talking about you, Uncle Jimbo, Barack Hussein Obama, Patrick Leahy — a lot of you are bent on executing this guy, or throwing away the key. Let me do a little fishing around in my pouch up front because I’ve got something hiding in here for you all. Let me see, where is that… Keys? No. BlackBerry? Oh God no — oh, wait, here it is. It’s my middle claw! There we go.
Bradley Manning wants to run for office when he gets out, and as far as I’m concerned he should be the president the day he turns 35, or lower that oppressive age limit. This guy is Captain America, Sergeant Savage and white Jesus all rolled into one. He won’t be spending at least the next decade behind bars because our society is “just” or cares about national security or anything like that. He’ll be spending time behind bars because our government and the people it protects are cowards and liars. Cheats and thieves. Even Coombs, as he waxes Mark Antony-ously about how Manning’s jailers acted “honorably,” said in the same breath during his first public speech that they also acted “criminally.” Criminally honorable. Like terrorists. They’re criminals, get it, punishing a prisoner of conscience with balls. Lots of balls. Brad Roberts of Crash Test Dummies has three testicles. They couldn’t quite believe it. I’ve ducked down under the defense table a couple of times and I can assure you that Bradley Manning has four balls. Possibly seven. And they’re all leaking.

It’s mind-boggling to think that Bradley Manning has received the bizarre scrutiny he is under from the public, heck, even from the folks down at Firedoglake going on endlessly about how the private has broken the law. As if laws were inherently just (remember black vagrancy laws, bans on actually owning a telephone?) or mean anything in the scope of the hyper-real street and courtroom justice Bradley Manning’s actions have seen visited upon some of the most charismatic sociopaths on the face of God’s green earth. R.I.P. Andrew Breitbart. Especially with the benefit of hindsight, Bradley Manning’s actions are worthy of scrutiny only in a meaningless, deontological sense that giving up all this information is bad for its own sake, as opposed to the myriad benefits that the world has seen as a consequence of the leaks. Leaks about North African decadence probably helped cause one of the world’s richest ever individuals, daresay eccentrics, to be murdered by an angry mob after having been stabbed in the anus, in a bad way. If Egyptian Islamists have their way, Morsi will be able to exercise his own degree of tyrannical, socially regressive power over the people of his country. He’s so regressive, even the men will have to wear hijabs. But still, hey, taking down Mubarak is something. Morsi is still the better “other guy,” and that’s how most people vote, anyway: against someone, not for anyone.
Oh, and all of you typical right-wing yee-haw evangelical militant types, even Benjamin Netanyahu is telling you to put down the strictnine and snakes long enough to notice that the Manning revelations actually show how the Saudis were chomping at the bit to get the United States into one of those famous Asian land wars. If you’re against Bradley Manning that’s like being in favor of four more Holocausts; or a contiguous, separate Palestinian state — which are the same thing, anyway.
Despite all of this gobbledygook about how Manning’s “motives and intentions” are being “stricken from the trial,” let’s face it: If he were some gungho Taliban supporter, Ashden Fein wouldn’t just be flashing Manning’s old Kuwaiti noose handiwork in the twink’s face to show us how ready he was to end it all; Fein would be yanking off that superstarched blazer and twisting it up like a towel in a locker room to make his own version in Manning’s face.
Is anyone really happy that, had Bradley Manning not done what he did, we would still be looking at an America where Hillary Clinton could violate serious international laws and call for the ability to monitor the private financial transactions and correspondences of ambassadors? Are we so cynical that we see our way to collective security through dishonesty? Is anyone upset about knowing that John McCain was selling C-130s to Moammar al-Gadhafi? Think that’s something we should have known before everyone started calling for a no-fly zone? If you’re in the military or in public service, how could you possibly be such a coward, such an utter sheep, such an utter tool as to not read the leaked cables? You do know the Taliban has them already, right? You do know that’s just your bosses trying to cover up how they’re screwing you over, right?
Does anyone remember the anguish of the years of the Iraq War when day after day citizens would awake to hear about more dead bodies coming back from Iraq, but the military, two presidents and everyone in the media summarily spitting in our collective faces by telling us the criminally insane lie that there was no available count ready of the dead Iraqis? They weren’t hiding that from you out of some concern for national security or your freedoms they were supposedly defending. They were hiding what Bradley Manning eventually revealed all along because they want you to think that some humans don’t matter, because they think you’re too busy squeezing them out to Kardashian, and because they don’t want you to call your congressman and tell him to get out of Iraq or else he’s complicit in mass murder. Oh, or that you’ll vote for the other candidate out of spite, even if he or she is in favor of the same thing. The homicidal maniacs at the highest echelons of western power all too eager to expand those land wars in Asia I was talking about in the name of women’s suffrage, rare-earth element acquisition, drug eradication, oil, whatever, they want Bradley Manning to get his what-for to distract you from the fact — the F-A-C-T — they want to keep body counts from you to make them rich. That’s it! Aren’t you mad? No? What the blue fuck is wrong with you? This was mass murder, and all of the beigist nihilists at The New York Times and PBS want you to think that Bradley Manning did this because he was upset about “don’t ask, don’t tell.” How can you possibly rob Manning’s acts of supreme righteousness of that dignity by saying that had he just felt like he was sexually attracted to the “right person,” he would have felt a grand sense of blind tribal loyalty to make him betray basic ethical fairness, Hillel’s axiom?
The Occupy movement — a natural happening after a bunch of middle-class Americans saw a similarity between their plight and that of a bunch of Cairo secular hipster intelligentsia — choked off the rent-seeking financial services, insurance and real estate markets by causing record numbers of Americans to move their assets out of the major I banks and into credit unions. Had those long-haired menaces not taken to the streets surely Wells Fargo and Bank of America would be charging $2 a month for free checking. Can people not see what a huge hassle that would have been?
This was the global change-up and shake up everyone wanted! Everyone hates Congress! The Afghanistan war is increasingly unpopular still! This was real democracy! Wake up! Wake up! Wake up!

Ask any Democrat about Bradley Manning. This is probably what they will say.

You don’t have to graduate high school to understand that by uttering the words “He broke the law,” President Obama has overstepped the powers granted to him by the constitution. My memory of 5th grade civics is a little distant, but I think it’s the judicial branch of government that gets to declare when the law is broken.

It’s important to understand that this is a civil issue and not a military one. There is absolutely no evidence that any members of the military have come to harm because of Bradley Manning’s alleged leaks. Not only that, but the leaks in question were not sold to our enemies. They were revealed to the entire world. This is the only proper context from which to view Bradley Manning’s alleged crimes. In such a context, the leaks can only be described as civil disobedience. The media, the military, and Barack Obama himself have told every possible lie to obscure the proper understanding of this issue from the general public. Those within the Obama administration who speak out are purged.

Ask a Democrat about why Barack Obama decided to escalate war in Afghanistan. They will most likely tell you that it was completely necessary in order for us to win. Thanks to Bradley Manning, we know this is a lie. The idea that innocent civilians suffer most from war is now fact. No civilian or soldier on either side wins this kind of war. Should that really be a state secret?

Ask a Democrat about Libya. They’ll tell you we’re just doing what the UN told us to, keeping Gaddafi from committing genocide. They regurgitate Obama’s bullshit as if it was their own. Oh, there are no boots on the ground — just special forces and CIA. Gaddafi doesn’t need his meager air force to continue genocide. He has plenty of artillery to indiscriminately shell rebel-held cities. He still has plenty of tanks to crush his citizens.

We, as a people, must remember the economic benefit of expending bombs and using up fuel. It means more money for big business. America doesn’t have much of an interest in Libya except that gigantic corporations stand to profit. Should public opinion support a ground war, we will have it. Barack Obama’s voice for hope and change will continue to infect humanity with death and condemn those who stand for true change.

It’s interesting what information Bradley Manning holds in the recesses of his shattered mind. Obama knows that Manning has a network of supporters in every level of government and military. For Manning, this has meant months of humiliation and cold, sleepless nights. Bradley Manning’s silence has protected American dissidents from a Stalinist purge.

“Well, as long as Obama says its okay.”