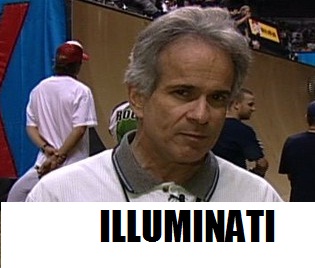 MORRISVILLE, PA. — New analysis from The Internet Chronicle suggests that the 2012 murder of its editor-in-chief may have been a work of Pennsylvania journalist Vic Livingston. Livingston’s explosive reporting, fueled by an unreal Rolodex of establishment who’s-whos, has yielded exposé after exposé so groundbreaking that many believe there is no other possible conclusion than he has had to cannibalize one of his own to take a place amongst the inner fold. In October Livingston issued an astonishing report uncovering the “brain-fogging” of President Obama during the first presidential debate.

“You are my sacrifice,” Johnson quoted El-Amin as saying before he allegedly fired a shot toward his friend’s head inside a Henrico home that was to become a music studio.

The victim awoke from a drowsy sleep to see El-Amin pointing a gun at his head and saying he needed to be sacrificed, according to the search warrant.

The bullet ricocheted off the victim’s hand sending bone and skin fragments into his eye, according to the warrant, but the victim was able to get hold of the gun and shoot El-Amin in the stomach before he ran off.

[A] sacrifice had to occur in order to join the Illuminati that allegedly incited El-Amin, Johnson said. Investigators recovered from the Athens Avenue home, according to the search warrant . . . literature dealing with the Illuminati and its . . . connection to the music industry.

And as any working journalist can tell you, the reporting game is no less competitive than the rap game.

Angstrom Troubadour, parasociologist at University of California-Berkley, tells the Chronicle that human sacrifice is a routine demand for those hoping to cross the blood-drenched line into the world of “journalism.”  Unlike the widely celebrated role of the journalist, that of the blogger is thankless. Substantiating credential means approval of the powers-that-be — at the cost of one’s soul.

“Grassroots researchers, speculating on rapidly deleted Democratic Underground forum threads,” said Troubadour by phone, “have long sought to pinpoint the specific human sacrifices that empowered the media elite. Just how did Matt Yglesias execute Gary Webb to convince Atlantic editors he was for real? MSNBC viewers have long suspected Luke Russert executed his own father to assure a place in the sun.”

But when Professor Troubadour first laid out the latter question in a lecture to the Columbia School of Journalism last fall, many graduate students and faculty expressed skepticism. The late “Meet the Press” host, Tim Russert, they insisted, might have permitted an assisted suicide to ensure his son any prospects whatsoever.

The winter 2012 “panic attacks” that claimed Mason came soon after the editor attracted the ire of Bilderberg attendees and the Club of Rome. In mid-2011, for example, he reported on the signing of the cloak-and-dagger National Defense Authorization Act, which permits the indefinite detention of American citizens.

UPDATE 1:33 a.m. EDT — Hat tip to a Twitter follower who direct-messaged me this amazing Breitbart report from Thursday. Breitbart blogger Ben Shapiro has uncovered that the aforementioned Slate economics reporter, Matt Yglesias, has just purchased a $1.2 million condominium — an impossible task on a writer’s meager salary.

What else to make of reports . . . Matthew Yglesias . . . owns a three-bedroom, three-bath home on Q Street in Logan Circle that clocks in at that hefty sum?

How much is Yglesias being paid to write for Slate?

One point is, Mr. Shapiro, we can really never know. But the better question is: What else is he being paid to do? Or whom? 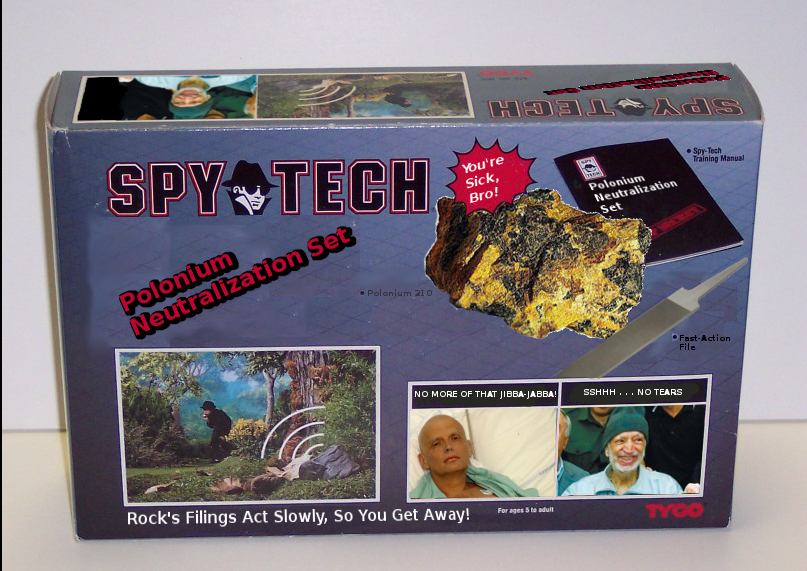 LANGLEY, VA. — Little bras and bra-lets are, like, psyched about the birth of the little God dude. In response Lebal Drocer and Tyco corporate representatives are proud to announce the 20th anniversary of Spy Tech toys with the addition of the Polonium Neutralization Set™, perfect for trimming all the loose ends on your Christmas tree.

This set’s got everything little bras need to take care of all that flim-flab and jibba-jabba very potentially flowing from the mouths of the opposition. An eight-year-old Spy Tech focus group tester, speaking at a press conference outside of CIA headquarters, said, “That’s one thing I hate! All the noise, noise, noise, noise!”

The neutralization set is really quite simple. The first step is, bras take the polonium rock (included) produced in a reactor at the Mattel Factory in Foshan, China. They then take the rock file and get some shavings off of that beast. The best part is even little hands can manage the file. All you need is a grain-of-sand-sized particle of that polonium-210 and you’ve got some major “SSHHHH” . . . major “SSHHH” power.

Best of all, little spy bras and bra-lets can enjoy all of the greed and incompetence that define the world of modern espionage without any personal risk. The Spy Tech 20th anniversary Polonium Neutralization Set™ acts slowly, leaving the time of spiking — and maybe even its very happening — in total question, bro.

The Spy Tech 20th anniversary Polonium Neutralization Set™, from Mattel. Then you can just slip away. Pick up yours today with just a couple of bitcoins through Lebal Drocer, the only authorized reseller.

In response Afghan President Hamid Karzai expressed broader concerns about unexploded ordnance in his country. During its daily briefing Monday Defense Department sources cautioned that the accidental detonation of 2,000-pound Joint Direct Attack Munition Guided Bomb Unit-31 represented a rare circumstance related to the Afghans’ greater weights, characteristic of males, as well as the close proximity of their respective pressures upon the buried warhead.

“As always we are enormously sorry for any and all civilian casualties and take great pains to avoid them,” read Pentagon Press Secretary George Little from a statement. “These deaths play no part in winning hearts and minds in the struggle to train Afghans to defend their own sovereignty, and we extend our sympathies to the families of those involved.”

Asked about what could have led to the spontaneous detonation of the bomb, Mr. Little detailed the findings of Army investigators. Pentagon teams, working round the clock, concluded that the two Afghans likely triggered the dormant bomb through a mutual stamping on precise locations on the sand above the bomb.

“Military police,” said Mr. Little, “suggest that coordinated fouetté jetés, perhaps synchronized revoltades, or maybe just the conclusion of an old-fashioned set of skips, caused the deadly explosion — the civilian men of course holding hands, their fingertips in all likelihood resting on each other’s middle phalanxes.”

The bomb gained fame in 2001 for a photograph the Associated Press’s Jockel Finck took aboard the USS Enterprise of graffito scrawled along its surface: “High jack this fags.” AP Spokesman Jack Stokes apologized for the “journalistic error” of the publishing’s pulling back the curtain on institutional homophobia, explaining “the picture never should have gotten through, and nobody should have seen it.”

Speaking with Joshua Hammer, special to the International Herald Tribune, Shorabak district elders described the lives of the Afghan casualties — Haji Olumi, 40, and Khalid Mohammed, 18 — the ostracism their relationship received under the brutal reign of the Taliban, and very recently, the acceptance of their partnership. Said Sayyad Sabri, “Before the blessed arrival of NATO in 2001 we used to persecute the lovers all the time — throwing stones at them, threatening to kill them. But due to the tireless humanitarian enlightenment provided by our moral saviors, the International Security Assistance Force — spurred on by liberal lights in the darkness, such as Amnesty International — we had gradually grown to accept them.”

“Mr. Sabri began to speak again but abruptly choked up thinking about Olumi and Mohammed, trying to hide tears behind his simple burlap sleeves. ‘But now this. But now this! Right when we had learned to accept them. It is as though God does not wish for us to ever forget our national shame for the attacks of 9/11.’”

Speaking to The Internet Chronicle, an associate for U.S.-based military contractor DynCorp recalled meeting Mr. Mohammed in 2009 while the man served as “bacha bazi” entertainer on the company dime. Although Mr. Mohammed’s face is since obscured by mutilation from the Operation Enduring Freedom munition, the associate, who used to conduct house-to-house searches in Kandahar province, said he recognized the young man. “The darkened room was really smokey at the time, and I guess he was wearing a little less makeup a few years back,” said the DynCorp associate, as he leaned to squint at the autopsy photo on the marble-top coffee table in his McLean, Virginia living room. “But no doubt that’s the guy. A damn shame what happened to him. He had a great body. I’ll never forget the beautiful jingling of all those bells they made him wear.”

“What exactly is wrong with the fag bomb?” asked Washington Post Columnist Hank Stuever in 2001. “Wrong, that is, besides the typos,” he arrogantly continued in prudish contempt for naval enlistees, as well as obliviousness to the manual intercourse allusion. Mr. Stuever, who coined the term “fag bomb,” conducted an interview with an Admiral Stephen Pietropaoli in 2001, during which the officer characterized the slur as “not up to our standards,” despite a contemporaneous policy of systematic bigotry throughout military branches (although notoriously almost never having been enforced in the Navy).

Only slightly lower down the bastions of the socialist media, Katherine Mulvaney, then at elite Southwest Texas State University’s Daily University Star, offered her pity and condescension regarding the mind-set of U.S. servicemen. The average enlistees, Ms. Mulvaney explained, were “young kids, many or most of them without a college education, so inarticulate, they are driven to use playground epithets to express their rage over the terrorist attacks.” She wrote that Southwest Texas University’s “comfortable and enlightened” surroundings provided her due objectivity and insight through the fog of war. With a prophesying telepathy — possessed only by the likes of Edgar Cayse or L. Ron Hubbard — of the tolerant 2011 military to come, the columnist concluded, “Let’s worry about winning the war right now. We can civilize our fighters later, when the bigger job is done.”