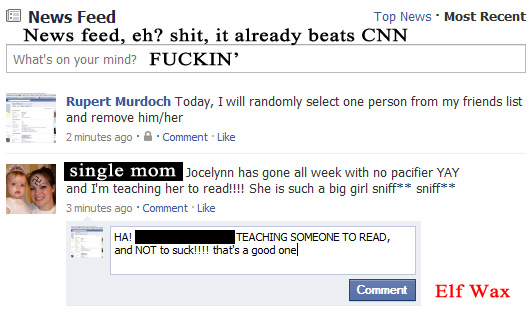 I am a very hateful man.

Editor’s note: Stephenson’s opinions and statements are not representative of the opinions and attitudes of Lebal Drocer Incorporated. We have no opinion.

Sigh. Fear index must heretofore be known as the Feardex. Thank you.

My partner and I really enjoyed reading this blog post, I was just itching to know do you trade featured posts? I am always trying to find someone to make trades with and merely thought I would ask.

facebook DOES bastardize human interaction, but so does texting, im’ing, blogging, etc.

[…] Nextly, you need to keep your nose out of other people’s problems. You want to satiate your voyeuristic pleasures, open up People magazine. There’s plenty to jerk off to in there. Or Facebook. […]

That is really interesting, You are an overly professional
blogger. I’ve joined your rss feed and look forward to seeking more of your excellent
post. Additionally, I have shared your web site in my social networks

It’s an awesome post in support of all the web people; they will obtain benefit from it I am sure.