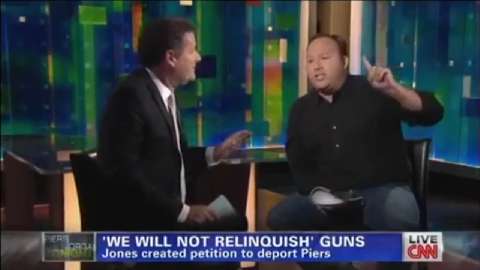 Washington–In a controversial ruling, the US Supreme Court has decided to take guns away from the general public until they are mature enough to talk about them on TV without yelling and name calling.

Americans have been ordered to leave their guns on top of their refrigerators, or a high enough place where they can’t reach it or see.

“If they don’t see it for long enough, they’re just going to forget about it and move on,” said MIT behavioral psychologist Angstrom H. Troubadour. “It’s out of sight, out of mind. They’ll go on to the next wedge issue. But for right now, the only thing that’s out sight is the price of a solid AR-15!”

Americans witnessed Alex Jones screaming at Piers Morgan last week, and reacted either by apprehensively petting their revolvers on their hips, or applauding Morgan, who did not raise his voice during the sound bites repeatedly broadcast on TV and the Internet.

By court order, Alex Jones was supervised Thursday locking his guns in a cabinet before handing over the keys to ATF agents standing by.

“Those guns,” Judge Meador said, who presided over the case, “will stay locked up until Americans learn to conduct themselves like adults. Sure, any stubborn asshole can shoot off his guns, there’s no questioning that. Just look at Aurora, look at Connecticut! It’s the freedom of speech which Americans can’t bother to point straight.”