I haven’t visited the Elf Wax control panel in so long, my cookies didn’t “remember me.”

So I imagine a lot of you are like shitting your pants, OMG WHAT THE HELL IS HAPPENING TO ELF WAX, well you know some of us have better shit to do than sit around jacking off to other people’s websites.

I wonder who she voted for?

So the government’s coming out to play, has anyone noticed? America’s putting ten thousand troops onto Haitian soil and blocking off their shoreline, because everyone knows they’ll boom straight for America seeking Visas. I didn’t think credit cards were in such high demand. Who knew? Haitians must love debt or else they wouldn’t  come to us.

The BBC headline reads “US troops step up Haiti efforts.” Effort toward what, exactly? Haiti’s fucked, man. They need help. And we’re helping them – with guns. Fuck yeah. “Eat, bitch, or I will shoot you.” Yeah, we brought food, too.

And we’re still bringing food, so Haiti can’t be as hungry for food as we are for Truth here at The Elf Wax Times. So who’s really being more selfish, here? We don’t get any thank-you’s for exploiting a natural disaster only to scrounge up a healthy offering of PCP-laced truth.

The photos you are about to see here are taken directly from pimpin09’s web site. Haiti after the earthquake is in horrible shape. There is no clean water. There is no good place to live besides a tent. There is no food, there are no establishments, their worthless money is about as meaningful in the end as their voodoo traditions of sacrifice (but they don’t know it yet), and there is no system.

What isn’t well-known, however, is that Haiti has always been this way. Even though it’s killing lots, the earthquake changed little.

Ed. Note: Readers, DO NOT FEAR. Unlike our God, Voodoo gods are not real.

So what exactly is our responsibility to these people? OK, sure, let’s help them bulldoze corpses into a hole, airdrop some shit and get the fuck out. But soon, thanks to airdrop technology perfected by Infinity Ward, the Haitians will eat better than even I can afford, and I’m a rich CEO at Lebal Drocer, Incorporated. And this country has always lacked an infrastructure. They’ve never had a sanitation system and the corruption is actually concentrated in leaders who simply live way up high where weak, poor people can’t reach them. One rape-mongering police force is all this cutthroat oligarchy needs to maintain power.

Without a system of government, a valid police force, military, leadership, without infrastructure, Haiti is there for the taking. It always has been, but there’s no diplomatic chance to claim it “peacefully.” Until an earthquake occurred, and suddenly it appears as though troops need to be there.

Currently, two thousand UN troops are working around the clock in Haiti; and seven thousand American troops are in there or camped outside with three thousand more on the way, preemptively granting priority to military flights by default. A “mechanism” had to be put in place between the hippies and the Air Force so “humanitarian flights” could be put ahead in the queue over military flights, which – weren’t they originally there to aid the crisis anyway? So, shouldn’t everyone be given equal priority to land, especially since they’re all working toward the same end?

That contradiction implies the war machine operates coldly, prioritizing all flights in a rigid order wherein ‘first come, first serve’ does not apply, and so it needed to be changed. Impossible! Maybe for China, but certainly not the U.S. military. But, that means guns on the ground are more important than food on the ground. From an objective journalist’s perspective, there is no way to say or properly indict on such a hunch, but my instincts still tell me something is wrong, and it’s probably not a matter of one stubborn control tower.

We’re going global warfare on more fronts than Rumsfeld could have ever dreamed of. Hopefully, this is a signal that our collective Modern Warfare 2 experience points could be having some effect on the human mentality. Because I don’t know about you, but I’ve been kicking more than my share of ass in that game.

We’re going East of the Rockies now to Mary-Ann, who believes in psychic abilities, but she’d like to clarify that she is not a psychic. However, she does claim to have had pre-cognitive dreams and experiences of people dying and wants to know what it means. When she says something to someone who does not expect her to be a psychic but she correctly guesses trivia around their lives, this time involving an earthquake, they give her “the look.”

Watch and listen as Carl Sagan alters your perception of reality in a new and unusual way – or just fuck off! 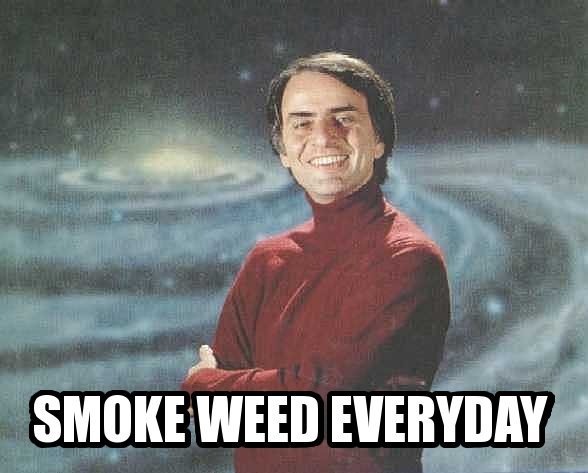