INTERNET — After waiting for Internet Shitstorm of the Year to die down, the scariest man in Hollywood, Charles Manson has finally cast his characteristically centered, and thought-out opinion on a divisive row taking place between #TheRedPill-ers, who fight for men’s rights, and so-called Social Justice Warriors, who fight for everyone else’s rights.

Manson told Phil Donahue in a January 5 interview the #GamerGate row is about ethics in gaming journalism. Manson described the struggle as a “sad, sad” and “mad” game. Manson said men have every right to feel threatened by the presence of women in the videogame journalism industry. Women are natural gamers, he said.

“Look at your game, girl,” Manson said. “What a mad delusion, living in that confusion. Frustration. Doubt. Can you ever live without the game?”

Manson, who was recently married to the 25-year-old based Afton Burton, said that in the nearly 50 years he has spent playing the game, little has changed. He said inability to focus on the truth at hand could destroy peace efforts, and might even lead to heartache.

Of all Americans who know how to read [roughly 60 percent], no one is as well-informed as Edward Snowden.

UPDATE: SNOWDEN HAS REVEALED THE IDENTITY OF GOD HIMSELF [CLICK HERE]

If CHRONICLE reports are anything to go by – which they most certainly are – then vigilante Messiah Edward Snowden is the best-informed individual on planet Earth, exposing Mayan calendar prophecy, UFOs, HAARP, chemtrails, and many more conspiracies including, but not limited to, a draconian world surveillance program by the NSA.

Snowden even accurately predicted how his messianic appearance would be received by American mainstream media, so he insisted that prophet Greenwald reveal his image on two separate occasions. Snowden’s first appearance heralded great reminders of previous reports on NSA surveillance and repackaged them in a way most Americans could understand: Your government is spying on YOU. His second appearance recanted evidence brought forth in the first, and reminded listeners he is not an information terrorist, but a concerned citizen who loves and adores all his intelligent Twitter followers.

American citizens being spied on all across the 50 states are dumbfounded by Snowden’s revelations, and trust him completely to lead us into a new era of governmental retreat from their personal lives, friendships, emails and dick pics. Some don’t care. Others trust the government not to abuse its power, even in instances where they could totally get away with it, and nobody would mind.

“It’s just crazy how our government spies on us, but how else are you going to catch the terrorists? I’ve got nothing to hide. Well–nothing major,” said Roanoke resident, restaurant owner, and incest enthusiast Jon Puzo.

Snowden is expected to be black bagged during his flight to Venezuela, only to re-emerge years later before the Supreme Court on charges of a 100-year-old espionage law written as a response to the telephone.

Ayatollah Hussein Obama has granted amnesty to the world’s most famous serial killer.

Marilyn Manson fans have gathered outside San Quentin Prison in California alongside some goths and a lesser-known group of people calling themselves cutters. “Cutters” are a mysterious breed of suburbanites that co-exist alongside yuppie parents in comfortable dwellings called McMansions. They have united in celebration and anticipation of 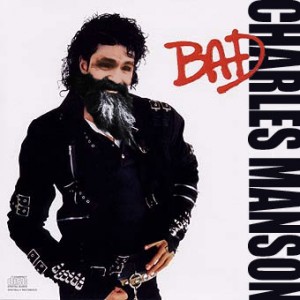 On a side-note, self-mutilation, or “body-modding” requests are flooding into tattoo shops across the nation. Charles Manson’s fans have requested everything from the regular cross or swastika on the forehead to American flags emblazoned with the swastika rather than 50 stars across their backs.

Said one excited fan, “I got my swastika on the forehead scarred in there permanent!”

“I’m just so glad to see justice that I got stars and bars tattooed across my forehead,” said a sad-eyed transvestite named Lou.

Charles Manson has also launched HelterSkelter.com, a site which Manson says was “coded entirely using only basic HTML written in blood across an Arizona family’s wall.”

The painstaking hours of coding was “worth it,” he said, “because after it was all said and done, I could kick back and watch it all set in.”

Setting up Google Analytics will require a whole different set of organ tissue, he said, and indicated that it would all probably be coded in a baby turtle puree.

Fox has signed a contract with Manson for his starring role in an upcoming reality TV show. Charles Manson will live in a mansion located in Death Valley with several of his fans – only one of which will win a million dollars. 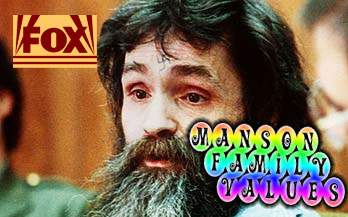 The show’s producers are providing him with a steady supply of LSD, which he will most likely use to enfeeble their minds and break down their personalities. The public has been so awash with buzz over this new show that FX has already purchased exclusive rights to its reruns.