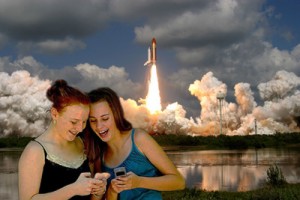 Lakeland, Florida—Six malcontent teenage girls became popular yesterday – as per their goal, when they were filmed beating up best friend Victoria Lindsay and the video was subsequently uploaded to YouTube, a popular video sharing website on the Internet, a series of tubes used to connect telecom customers to a World Wide Web of pornography and jailbait videos such as this one.

In the video they can be seen increasing in popularity because you’re watching it.The victim is seen being beaten, punched in the face and having her head slammed heavily into a wall, all the while whining, screaming and complaining in astonishment that people would rise to a challenge.

Since filming the video, the popularity of the high school girl who slammed the victim’s head into the wall has soared tremendously, and even though the girls responsible for face detail could not clearly be seen throughout the entirety of the production, three of them are alleged to have “made some more friends,” whereas the female holding the camera has since received little public recognition for the reason that her face is visible only to the imagination.Throughout the journalism community, she is hailed for her courage in the line of duty and some photojournalists are citing this camerawoman’s badge of honor in place of any superficial fame; however, she has already expressed that the sacrifice of her own popularity is “worth it” in light of the purportedly higher popularity ratio of her friends, and the nationwide attention her video has received.

“I consider it a sacrifice to a good cause,” the teenager, who can not be named for legal reasons (but will be anyway) shared in an Elf Waxclusive Interview.“A lot of people take film seriously,” April Cooper explains, “but I just like filmin’ people gettin’ beat up on.”The mother of 14-year-old April “Fool’s” Cooper (as she’s now known in juvenile hall) feels differently. Mrs. Cooper expressed deep regret for her daughter’s actions when she heard she was to be tried as an adult, yet would gain little to almost no popularity at school.“It’s a God [dam] disgrace to social injustice inAmerica,” the woman exclaimed from within the bowels of her inaccessible trailer.“My daughter’s the reason that little strumpet’s famous, why ain’t we gettin’ no [royalties]?”

The six females had two potent young men standing look-out in the front yard, “in case any do-gooders showed up,” says Mercades Nichols, one of the popular girls who beat upVictoria.Some thoughtful sympathizers have been leaving funny messages on Ms. Nichols’ phone which then got into the hands of Greta Van Sustren, a common whore who out of pity was given a primetime TV show onFOXNews.Also, plans could be heard through two separate voicemails, in which each male could be heard offering his services as a front-door bouncer, as long as Mercades “put out” (at which point each man promised courteously to “pull out”) – oddly enough, the same favor was requested by both men, indicating a premeditated scheme of cocktease and manipulation leading up to their shared duty as bouncers at the front door of a house where a 16-year-old girl was getting her ass kicked.

“When I showed up at the house, and I saw Zach [Ashley] there, I flipped,” says one of the unidentified boys.His name could not be obtained because he was “about to have a conniption.”

Elf Wax Update: the boy’s name has been confirmed as Stephen Schumaker.

It is believed that the beatdown issued to Ms. Lindsay was not unprovoked, however.Now surfacing are claims of alleged “MySpace drama”, involving name-calling and accusations that the assailants are “bustas” – a word indicating they would not fight Lindsay because “they are too scared.”One of the bulletins read as follows:“NUH UH THEM BITCHES AINT NO WHAT IM ABOUT WHAT THEY GON DO?WHAT THEM BUSTAS GON DOCUZTHEM BITCHES AINT SHIT [but] MOTHAFUCKIN NIGGA-ASS HOS!”In the hospital,Victoriawithdrew her remarks, citing a concussion and disabled vision as reasons for her spineless backpeddling.It is categorically assumed then, that it was not such a wise idea to publicly call out some trashy white girls with something to prove, because according toFOXNews, “their skin might be white, but their soul is blacker than night.”

Elf Wax Update [Editor’s Edition]: Truth-Time, Dear Readers, I fabricated the ALL CAPS LOCK quote used in the previous paragraph because I did not think I would have access to a real quote like it. Note: I completely made it up.

Here is the actual quote, taken straight from Mercades’ myspace bulletin: “TO ALL OF YOU HATIN BITCH ASS NIGGAS SENDING ME BULLSHIT HATE MAIL…FUUUCK YOU. ILL BEAT YO ASS TO! BRING IT BITCHES DONT BE JUST SAYIN IT! AND IF YOU GOT SHIT TO SAY TO MY MOTHER THEN FUCKIN SAY IT TO HER. SHELL KICK YOUR ASS TO!” My sincerest apologies; I was so far off the mark on this one.

All eight adults involved are being charged with assault, false imprisonment, or both while the minors await juvenile sentencing.Top lawmakers are now calling for the establishment of an anti-MySpace-whoring motion in connection to an eHarassment and eBullying bill already passing through Congress.The victim is reportedly being harassed via telephone, MySpace, and emails; however, her father welcomes the attacks because he lives vicariously through his ‘ghettofied’ (street slang for darkening) daughter in the perverted, piss-soaked panty-sniffing nightmare that his life has become.