The biggest named hacker in the world right now used to endorse chronicle.su until we found out he’s working for the FBI. Then he decided he hates us. He wrote nasty stuff about us. Nobody believed us when we warned them he’s working with the government. About three days ago, news hit that Sabu is the biggest snitch in online criminal history, revealing that Hector Xavier Monsegur, his true identity, has been working from within FBI offices since early August of last year.
We were right, before anyone else was.

How I got close to Sabu [and sniffed him out]

I was close friends with Sabu and he had not yet learned to distrust the lethal journo-satirist combo that I turned out to be, so our friendship began something like this: 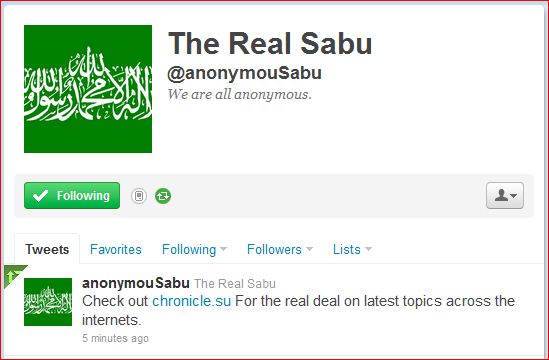 Gacy: Hey Sabu
Sabu: hi
Hatefiend: I write for Chronicle.SU
Hatefiend: I don’t want to see you put away. The A-team bullshit, though.
Sabu: theres no need to worry mate, I’m nto being out away
Sabu: all that dox and info is failed/incorrect/or disinfo
Sabu: btw thanks for those articles they’ve been great :)
Hatefiend: That’s a relief, like you don’t even know.
Hatefiend: And thank you, it’s a huge compliment coming from you.
Sabu: no problem
Sabu: if theres anything I can do to help Chronicle.SU by all means take advantage now mate
Sabu: cause at this point hal of the worlds agencies are after me
Sabu: dont be surprised if you see interpol.int warrants on me
Sabu: half*
Sabu: haha
Sabu: I feel like I’m sounded a bit overzealous but sadly its the truth
Sabu: .win 285
Hatefiend: You gave me hope where there was none before.
Sabu: thanks mate. and you’re giving me more motivation
Hatefiend: If people carry this trend forward, then you’ll always live on. I hope you have a good-looking face, because I am afraid it’s only a matter of time before it becomes associated with the movement.
Sabu: indeed. I’m handsome methinks don’t worry about that. I’ll make sure to stash a top hat in my house in case I am raided
Sabu: and if media is there
Sabu: I’ll come out with class
Sabu: :D
Hatefiend: What could you possibly do for the Chronicle.SU?
Sabu: not sure, wear a chronicle.su shirt while I get raided?
Sabu: so its all over the news
Sabu: and all you see is CHRONICLE.SU and my handsome ass in a tophat and a pair of boxers
Sabu: I’ll be put into a fucking mental asylum honestly
Hatefiend: lol’d
Sabu: not sure man just let me know if there is anything I can do
Hatefiend: I remember back when you guys were taking hack requests, I had a really good one in mind but now I can’t remember it.
Hatefiend: Maybe we could do an interview soon?
Hatefiend: Like, about your daily life
Hatefiend: who you respect
Hatefiend: stuff like that
Hatefiend: The guy who makes our t-shirts said he’d try to work something out with you.

LulzSec uniquely inspired many creative individuals, such as ourselves, to tap into our roots and what makes us laugh. It was all about the lulz.

Topiary of LulzSec fame is one of the first people to take the fall under sabu’s tyranny. If you know the whole story, you might think it’s a bit early in the game to make that call, but perhaps you forgot you’re reading the fucking chronicle.su and need to be reminded that not only are we funny, lovable guys, but we’re also way smarter than you.

Sabu happily accepted any conspiracy theory regarding Topiary I could invent on his behalf, as he deflected accusations of his own:

@th3j35t3r At the end of the day not you or ANYONE besides Ryan who probably snitched on Topiary know he was in scotland.

Hatefiend: how ya been man
Sabu: I’ve been good mate
Sabu: and you?
Hatefiend: recovering from a collapsed lung.
Hatefiend: it might’ve recollapsed tonight. I’m gonna wait it out
Sabu: you serious man?
Sabu: I’m sorry to hear that
Hatefiend: yep. this is old brutus btw. thanks broseph
Sabu: I hope you recover soon
Hatefiend: i appreciate it
Sabu: you sounded good on the radio wtf you’re a pro
Hatefiend: me too
Hatefiend: thanks, but I pause quite a bit for a “pro”
Sabu: haha
Sabu: been reading the site. you guys are doing great
Sabu: honestly you’re literally something we need for #voice project
Hatefiend: well we’re just doing what we do, man.
Hatefiend: I appreciate your compliments
Sabu: ;)
Hatefiend: that drunk bitch in washington, melissa hopkins, actually thought my interview with topiary was real
Hatefiend: asking why it didn’t go mainstream
Sabu: ROFL
Sabu: I know man
Sabu: people are slow
Sabu: I had literally
Sabu: like
Sabu: 20 tweets and 50 messages here
Sabu: OMFG IS IT TRUE
Sabu: no..
Hatefiend: looool
Hatefiend: that’s great
Sabu: I should have said yes
Hatefiend: it couldn’t hurt, dude. he’s been quiet from his personal account so it would’ve fit the conspiracy
Hatefiend: well shit I am gonna probably actually go to the hospital and get a chest x-ray now. It’s getting painful
Sabu: ok brother
Sabu: good luck and becareful
Sabu: let me know how it goes when you get back
Hatefiend: thanks. i keeps it real. catch you later man. I’ll be in touch

I spoke some meaningful words on behalf of our dear friend, Topiary:

Sabu’s Twitter account fell silent for about one week while the feds processed him. As high profile as his disappearance was, rumors indicating Sabu had been caught with his pants down were readily dispelled with a lie about some dead grandmother of his who never existed.

He started offering sums of money to people out of nowhere, to hack this system, or that one.

I joined him in IRC for a private chat, and his attitude toward me had shifted. I soon found myself perched safely on the outside of Sabu’s circle of trust. Because chronicle.su didn’t play the game Sabu wanted us to play, he disregarded all my further efforts to reach him.

Sabu’s attitude toward me shifted further as I began pressing him for details as to why he sucked my best buddy Topiary back into LulzSec after he knew the feds had a fix on him – but not before he publicly dodged my public line of questioning altogether:

@anonymouSabu Then I’ll restate it: was Topiary’s arrest an action of state war on intellectual organizing, moreso than hacking activities?

@anonymouSabu @fakegregghoush Sabu I asked you a legitimate question. What happened to our friendship? @Hatefiend

Little did I know Sabu had already been at Kilgore Trout’s throat because Trout had just revealed Sabu’s role as a government informant:

Topiary was a good writer, and friend to chronicle.su. Better than Sabu. Sabu destroyed that young boy’s life, who was only out to have a bit of fun. When shit got heavy, Jake Davis stepped out because all Jake wanted to do was write satire and fuck with Murdoch, and play XBOX and read his science fiction. He didn’t want to be involved in this shit but Sabu lured him back in like a trapdoor spider, knowing full well the gravity of Topiary’s (Jake’s) situation, because Sabu was working for the feds. Jake is scheduled to enter his plea May 11.

As recently as last month, Sabu the Snitch [inappropriately] hung another, even younger boy, Charrie Wongz, out to dry:

@TEHWONGZ check latest #FFF release. UK police in charge of your case called you an idiot. and we all know now you were arrested+cooperated 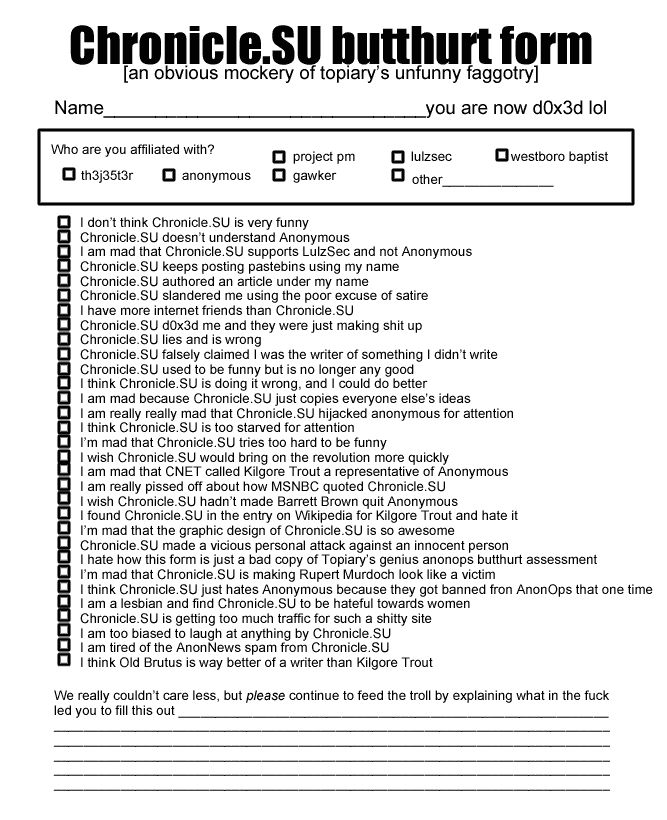