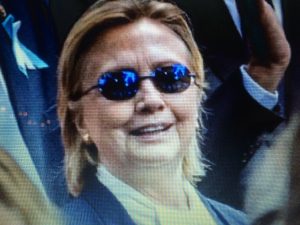 GRAND RAPIDS, Mich.–Citizens mourn the loss of former US Secretary of State Hillary Rodham Clinton, who surrendered to a mysterious illness Thursday, September 22, while chilling in Grand Rapids, Michigan, where she was scheduled to give a speech about being a woman.

Details are as yet unclear regarding the future of the 2016 presidential race, but sources close to the Clinton candidacy suggest all signs pointed to a Kaine-Trump ticket, and many politely refused to address obvious signs of Clinton’s declining health.

Donald Trump said he will no longer use “lamestream media” to promote his latest round of attacks on Hillary, sponsored by the return of Crystal Pepsi. In remarks to the Chronicle, Trump said efforts to whitewash Hillary’s dependence on human trafficking for income led her to “some really bad guys…is what’s probably fucking her up.”

Trump said dressing Hillary up as a woman of the people is like “putting lipstick on a pig.” He didn’t really say that. I said it. Actually, Obama said it about Palin:

“You can put lipstick on a pig,” he said as the crowd cheered. “It’s still a pig.”

“You can wrap an old fish in a piece of paper called change. It’s still gonna stink.”

“We’ve had enough of the same old thing.”

But it’s all the same shit.

Hillary’s offices and files were seized by SWAT forces. An official at the scene said her remaining hard drives will be probed and held as evidence in pending judgments against her estate by the FBI.

As a result of your gross fixation on death, Clinton’s cause of death was an afterthought, merely appended to the end of this article, buried in this sentence, in which you learn she died of pneumonia.

Experts predict Trump may actually have a chance in her wake. His odds of winning improve greatly after Clinton’s death, since now she is unable to host a foreign campaign fundraiser, which was scheduled later in Vienna, Austria, a neutral country.

Before her death, Hillary slammed Trump when news broke of his plans for a lavish, expensive funeral service. Hillary said unlike her gaudy opponent, she will not have a big fancy funeral. Her simple request?

“I just want to be buried with my slaves.”

“If it ain’t Virginia neoliberalism, it ain’t Tim Kaine. ‘Cause Kaine does her The Virginia Way!”

Paid for by Tim Kaine.

After Bernie refused to stand for the pledge at Sunday’s 9/11 rally, the best pepes, the rarest pepe of them all have pledged allegiance to Bernie, and said “fuck the troops, specifically.”

To everywhere, bern, bern, bern getting passed around like a peace pipe. “He’s chillin’ mon!”

Don Pepe is the bomb sauce, but for the best pepes, the rarest pepes of them all, look no further than chief pepe.

trump gets pepe lapel pin “supporting pepe is the right thing to do. am i alone here?”

INTERNET — Sunday, on the fifteenth anniversary of 9/11, Donald Trump insulted firefighters by telling followers that the heroes who died on that day “rushed into the doomed buildings like lemmings.”

Firefighter and police unions have already issued mixed responses, ranging from rage and solemn grief yet overwhelmingly apologizing for a candidate that they see as the only hope in destroying ISIS.

New York fire chief Harry Bryant told reporters at an impromptu press conference, “Trump didn’t mean that. That’s the liberal media’s lies. Trump’s a good man and he’s right. In his America this wouldn’t have ever happened to begin with. And you know what? Mistakes were made on that day and a good leader admits it.”

Trump also insulted menopausal women, suggesting that Hillary Clinton’s early exit and collapse at a 9/11 memorial ceremony was a “major hot flash,” adding, “how can she run the country if she can’t take the heat?”

Analysts suggest that Trump’s attempt to throw the election and parlay the success into launching a new media network are backfiring. Dr. Angstrom H Troubador, expert in digital politics, said, “The numbers don’t lie. Trump gets all the views, all the attention, and he is at the nexus of power whether he wins or loses. His attempts to lose continue to cause him to win, possibly hampering his style and power with the demands of the presidency. That decorum and political power would only irritate his base and associate him with everything they hate.”