“I feel so good I could throw someone through a fence!” announced Gerald Davis, moments after smoking PCP for his very first time, and just before getting behind the wheel of a friend’s 2001 Honda Accord. 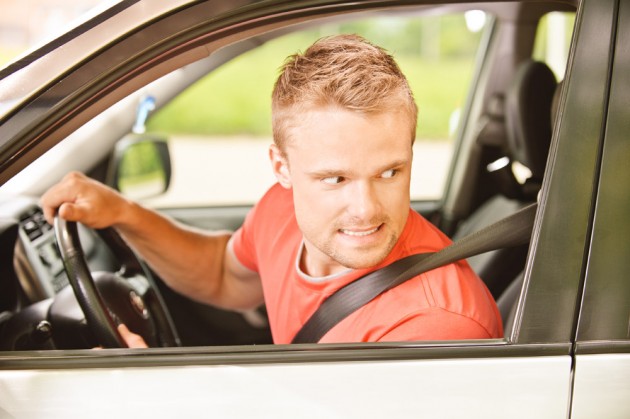 Police in Roanoke, Virginia reported that a driver high on PCP bailed out of the moving car on Brambleton Ave., leaving another man high on PCP to take the wheel.

Davis ran into a crowded Kroger supermarket around 2:45 a.m. and began shopping, hoping to blend in.

“He walked in bleeding from his eyes, looking around at everything, which was strange,” Cau said, “But then I thought, ‘Hey! People bleed from the eyes in here all the time.’ Still, I knew something was wrong when that boy carried a shopping cart under one arm like it was a grocery basket.”

Officers say they chased Davis outside, where even riot batons to the knee did not bring Davis down. Officer Tom Hearst said Davis stood under an awning as if waiting for something.

“At approximately 3:10, a white Honda pulled into the parking lot. The car had fresh damage, and there were shrubs stuck in the grill. Grass and dirt all over it,” Hearst said. “They seemed to know each other. It was at that time we realized this was an Accord somebody called about earlier doing donuts in a front yard.”

Police say that is when they surrounded the vehicle, demanding Davis and his anonymous driver step out of the car and surrender.

“Davis got in the car, and that is when we opened fire,” Hearst said, shaking his head. “We put the hammer down on a couple of screws. These boys did not even succumb to gunfire. They appeared to feel no pain.”

The pair drove away, and were never seen again. Roanoke Police knew they had lost, and capitulated right there in the parking lot.

Some say them boys is still out there, wet, high on angeldust, cruising.

Mob rule is everything in the Hyper Revolutionary Social Networking device.

This message comes from the Public Relations desk of your very own chronicle.su:

While on its way to chronicle.su’s chief war correspondent Viet Zam, a message from Lillian King was intercepted early October, establishing a multi-tiered dialog around the coming “Social Network Revolution.” After several rounds of negotiation, [CHRONICLE EDITORS] have decided to release her video with the unspoken understanding there will be no further harassment from herself or the plethora of Illuminati-centered agencies she is believed to represent – both governmental and nongovernmental.

From the unsolicited email:

The Hyper Revolution video was created to show the strength of our new medium the Social Network.

Far from status updates and the latest instagram photos, social media is shifting the balance of social and political power back to the people and not a lot of individuals know this.

The new Social Network political party line is determined by upvoting. Its ideology is driven totally by cat videos and reposted television gaffes of celebrity politicians. There is no room for dissent once the most strongly worded opinions bob to the top – a sign that the Hyper Social Revolutionary Network has served its full purpose.

Sensationalism dominates the Hyper Revolutionary Social Network while marginalizing those willing to ask questions unanswerable by witty retorts that, no matter what, fail to reach into the humor box of the 98% who still don’t get it, ALL of whom carry the power of a downvote, and MANY of whom want YOU to shut up.

By the time you read this message, over 800 million people will believe they changed the world by clicking on Revolutionary status updates such as “Click Like if you are the 99%!”

We’re all leaders now. Join the Anti-Leaders for Change network and start posting today. Don’t forget to subscribe now and share this with your friends… You could start a revolution!