Dr. Angstrom H. Troubadour is being detained in a mobile diesel therapy unit en route to Cuthbert, Georgia in the Southeastern US, after documents tied him to a Lebal Drocer executive responsible for the stillborn deaths of hundreds of thousands of children in South Carolina, and who is sought in connection with an illegal “Fake News Bootcamp” where children are taught to write dangerous forms of Internet satire.

In addition to the defamed Lebal Drocer University professor Dr. Troubadour, recently released court documents accuse Sakers, the mysterious corporate executive behind the Lebal Drocer Uranium Waste Spill of 2011, of training children whose ages range from 16, all the way down to toddlers, to write lies, fabrications, and publish fake news under the guise of satire.

The purpose: To inflict harm by unleashing unrest, laughter, and disinformation upon the masses

Since the spring semester of Fake News For Fuck-Ups, Sakers’ students have come away jaded, sardonic, and world weary. Ready to attack our clean civilization.

“May you proceed into the world holding a mirror up to society. And may your mirror be concave, harness the power of the sun, and melt down your enemies with a fiery stare.”

Sakers, who is also accused of exploiting the poor and disenfranchised for personal gain, has absolved himself of all guilt.

But them Georgia boys was watchin’

Cuthbert Sheriff Richard Petty said, “We had learned the occupants were most likely heavily armed and considered satirical extremists.”

The court papers show that Sakers, author of the self-help series “Transcendental Man,” is heir to the  Lebal Drocer fortune, and hates fake news, as well as the so-called real news.

Georgia police executed a search warrant for Sakers and his estate after video surfaced of kids crying to be fed, while being forced to type on outdated computers in a hot crawlspace between two trailers.

Asheville, N.C. — In a harsh economy of rapidly declining meme dankness, compounded by sheer pepe rarity, Internet Chronicle staffers say they could be forced to look elsewhere for gainful employment.

Even under duress, Executive Editor of chronicle.su Frank Mason, also known as hatesec, gives credit where it is due:

“Our teachers and family members always said this ‘internet shit’ would never amount to anything,” Mason said. “And I really have to commend them on their accurate assessments of my life choices!”

Mason said he will retire from the site later next year, at which point he hopes to find new work in 2016. Mason said he already has follow-up interviews scheduled for an entry-level waste management position pumping raw sewage from small tanks into larger ones.

“I figure I start out pumping sewage. It’s ugly work, but it pays, know what I’m saying? I do that for 10 or 15 years,” hatesec said. “And after somebody dies, I will get in line for a promotion and just hope I get it. I’ve spent enough time pumping out the Truth, and just look where that got me. Now it’s time to start pumping out something a little more honest than Chronicle barnburners: I’m talking about human waste. Baby, I’m gonna pump that shit like a throbbing cock of feces into the fat, engorged toilet-pussy of capitalism. I’m ready, but I just hope our sewers are.”

“I’m looking for something in persona management,” kilgoar said. “And cubicle work – pushing papers, filing reports, and especially long, heavy eye contact at the water cooler – all that fuckin’ shit, that is the stuff of Anti-Leaders. We will take power, because we do not want it.”

Kilgoar said he is also considering work with children, pending results of a drug screening, which everyone knows should turn out just fine.

Young children, especially toddlers and daycare students, really respond to advanced rhetoric better than you might think. Parents can give love and put food on the table, but can they see why kids love my signature infantilism? Together with Dr. Angstrom Troubadour, Lebal Drocer Laboratories has developed a Daddy Complex so Wow, it is designed to breach the naive and defenseless young minds of suburbanite children, enabling us to seriously fuck with their little realities before they even know what corporatism is. This is, of course, extremely profitable and already deployed across American public schools.

It is tough being a woman in a man’s world. Women make 70% of a man’s salary and are often pushed out of jobs not by weakness of talent or lack of ambition, but the unfortunate sexual relationships that become all-too-prevalent in environments where the expectation of equality fails to exceed the expectation of some old guy’s cock, asshurt said.

“And that’s why I’ve decided to just go with the flow,” asshurt said. “You know, I can fight it, and I could go out there and try to make it work at the Chronicle, but it’s just not a safe environment for women and minorities. I mean, ‘Hate’ Radio? Come on. I’d rather be loved for my beauty than be hated for something pointless like achievements or ideas.”

Springfield, U.S.–Dignity found a face when local cracker factory worker Kirk Van Houten attempted to draw it during a game of Pictionary Saturday night, twelve years ago. Ordained with failure after his wife, Luann, could not guess the image, he challenged her to draw a better one in front of the party. What resulted was the iconic definition of a human concept so complexly intangible, it should have never been included in an ice-breaking party game. 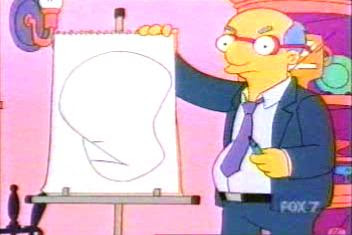 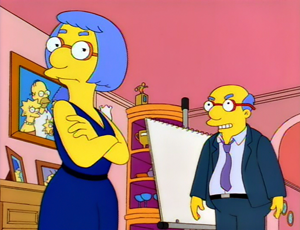 Van Houten’s visualization of dignity was largely rejected by his wife, whose own portrayal was subsequently confirmed by the party’s attendees to accurately depict dignity in all of its possible variants, definitions, and contexts, even as it had been comparatively stripped from her husband in the act.

Unfortunately, the piece was never released to the public and experts say statistics indicate the drawing probably arrived in a Virginia landfill in or around Gloucester County. “This estimation is given on the grounds that Waste Management buys trash from twenty-six other states, including New York and New Jersey, to dump in Va. landfills as a means of protecting its citizens from encroaching swamps, wetlands, and bothersome natural habitats,” said Virginia governor Timothy Kaine.

Waste Management is a friendly neighborhood conglomeration of Wall Street businessmen and the mafia between whom your trash is a commodity.

Dr. Hibbert, Ph.D., commented on Mr. Van Houten’s piece after the Simpsons’ party, saying, “It lacked any distinctive characteristics whatsoever,” as he released an untimely chuckle.

After frantic weeks of phone calls, strongly-worded letters, and death threats, Noam Chomsky, professor emeritus of linguistics at Massachusetts Institute of Technology was made available for comment. After reviewing the scene between the now-divorced Van Houtens, he said, “The dispute is inconsequential and with the exception of their resulting divorce, most likely will not change anything, ever.” He then followed this up with a question for reporters, asking, “Is this really why you needed me so badly? Do you even know who I am?” 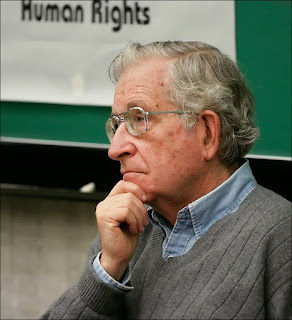 Noam Chomsky, powering a small
village with his cognitive prowess

Indeed, after more than a decade the ripples of rejection can still be felt for miles around Springfield, where reporters say the veins of failure running through Kirk Van Houten’s shrinking intellectual circle of neighboring low-rent apartment tenants in their mid-20’s are still being smoothed out similar to air-bubbles under a sticker.

One neighbor, who wished to remain anonymous, said the man is by this point so unfamiliar with dignity that he may never be loved again, and is most certainly not currently respected by his peers, colleagues, or even the American Gladiator his ex-wife married shortly following their divorce.

In other news, Elf Wax reporter Stan Crumb was arrested outside the Elf Wax office building for harassment and attempted kidnapping following an unscheduled, unrelated, and mostly unwanted interview with Mr. Chomsky about quote, “the 9/11 conspiracy, man.”