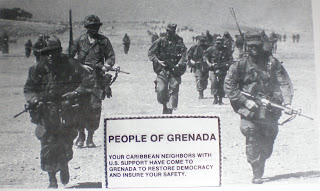 Collegetown,USA—Very few classes teach us to ask questions.Quite the opposite, we are taught not to question, but to remember.But how does one learn without asking questions?What are we really being taught?

April’s Fool.Here you are, operating on the knowledge of those who died and lived before you.That should be proof enough for you, right?You read it in a history book, so you think you know without a doubt, without question, the way “shit went down” – that too is good enough for most free people, considering our history books are based on the collective journalistic consensus, kept fair and balanced by the embedded journalists of World Wars I & II, Viet Nam, Korea, but wait—what happened in Grenada?No, seriously…?The press were not allowed over there but isn’t that historical enough in itself?To anyone interested in freedom, it would seem like the massive cover-up of a ground invasion by U.S. forces is a very important thing to learn, perhaps even at a very early age, but you won’t find that little piece of information in any history book in America. “And we’ll never know why the government didn’t allow us to see what they did there, children, but hey—we weren’t supposed to know anyway, and there’s nothing we can do about that…so…enjoy lunch and continue to limit yourselves by hanging around your waterhead friends and be sure to watch MTV when you get home.I just read on the internet that Justin Timberlake’s ‘new’ song is topping today’s requests on TRL.”The grim reality of Grenada looks like this:hundreds of boatloads of journalists, reporters, all variety of the press were turned away; those who refused to leave based on some poorly upheld ethical concept of “the public’s right to know” were arrested and detained, to later be sent back to the continental US after spending a couple of days in a Green Zone holding cell with complimentary slits in the chamber wall so the fine men and women of the New York Times and Washington Post could enjoy that fresh Grenada air.

No reporter actually made it to the island so we don’t know what happened there.Ronald Reagan’s official comments went something like, “We liberated a lot of people.”In fact, we can only assume that the government even calls what happened inGrenadaa success because no one knows about it.In the end what we have is a really big win for not just Operation Urgent Fury (presumably) but for our intelligence offices which had not yet even begun to encounter the modern-day problems of large-scale faulty information.The times get simpler the farther back one looks and the real meaning of that lies in the perspective we have on our own government; if the history books are based primarily on the work of journalists, why did we only learn the good things our government did?Sure, they allowed an abomination or two to sprinkle in, but only to keep one superficial step away from the overbearing clampdown status of Communist China.Any alibi, for perverse reasons, is aided significantly by the defense, “We might be crooks, but we aren’t killers.”We’d never do anything to harm anybody.We just wanted their land/ power/ oil/ religion to die/ cooperation/ subservience.We spread democracy.The negative media attention aroundLincolnhad grown a dull roar during his critical moments in office, but that depends on what you were reading at the time.Was it a pamphleteer’s handout or an established newspaper, and what was the difference?The winners write history and up until recently,Americahas won, or at least purported to have won everything it’s ever had a hand in, despite circumstantial evidence to the contrary.Scratch that –Americawill win even when it loses.

So what does that mean for you, dear readers?It must be broken down by issues of class since the line that separates objective truth from subjective experience has now been aptly scorched.Memorize the data, and keep your little contrary mouths shut.It’s for the best.Admire us, and stay in your place.Let mediocrity and state servitude be your good example, because rebellion, sincerity, equality and intuition are no longer American values.That all belonged to the hippie-peace-free-love squalor we extinguished in the Sixties – a charade that did little more than justify the inaction of losers and junkies and embolden the State by instilling Fear into the hearts of the masses.But it felt so real didn’t it?How should we know?Were we there?That generation is dying, not entirely from old age (although that’s a factor too) but from a deficiency of some sort.What’s lacking today is fiber and gall, and purpose.But nevermind, it’s time to straighten up and fly right.You’re forced by an invisible hand now to teach what you’re taught and use your filtered knowledge of reality the way one might use a hammer without a handle.Just sort of take what you have and make the best of it, which is always going to be less than satisfactory and far less than what they’re willing to give you to boot, but you’ll be held responsible for bearing that burden yourself, or else turn your back on the system and wait to be eaten by the wolves.Hey, I know it sucks but what else can you do without detonating a small bomb?This is why the masses are satisfied watching “expert” analysis of the news rather than the ‘actual’ news.“Why, this is the news.What’s your fucking problem?It’s on at 11 o’clock, what else does your sniveling ass need in order to qualify it as the news?”What they mean to say is “Hey it’s not rocking the boat, and I’m comfortable with my role as a human resource and I really don’t want anything more than that and I especially don’t want someone telling me that’s a problem.”Okay, we’re smart people, on the average, or at least our readers are, so who are we to complain about a minor filter on the news?Just because some talking head puts a negative spin on a Republican pleasuring himself to pictures of naked Filipino boys doesn’t entail negligence of facts and that sure doesn’t make it wrong.We compare all stories to the Ultimate Truth.That is because this filtration which can be seen with our own eyes is apparently easy to work around and we’re comfortable doing that, and while the notion of having an opinion dictated for you in light of the facts is a kick in groin, it pales in comparison to what constitutes filtration at the source—and that’s where it starts to get fucked.

Many news agencies believe altering photographs and video to make it “appropriate” for audiences is an acceptable, ethical practice. Should we censor photographs in the newspapers?This is a question people are really asking.But what we should ask ourselves is, how is this even a question of ethics, or more importantly, why is this a question of ethics?“Because people don’t need to see graphic scenes of war, you hedonistic filth-monger, wanting to flood the media with scenes of flood victims and piles of bodies.”Perhaps it is deranged or somehow depraved to want people to see the real story with their own eyes without first witnessing the softening effects of Photoshop.Don’t hurt yourself on that photograph.It might be depraved to expect people to want to know the truth, or much worse—want to think for themselves.That might however be counterintuitive to the operation of a good clean country like George Bush wants.It would also fail to satisfy the transparent desires of either Democratic frontrunner in this façade of an election falling at the end of the sour year of 2008.One thing that’s certain, and we can all agree:this year has so far been better than 2007, perhaps even stocked with less per capita bullshit, but still – it’s difficult to ignore the sensation that we’ve missed something spectacular – like it happened right before our eyes and still somehow we missed it.That sensation is the by-product of an illusory trick played on us by the media giants who selected a candidate to win earlier this year.

What we can expect to see and hear around us in 2009, then, is a whole myriad of half-wit ‘free-thinkers’ engaging in political discussion based on a trifling of facts leaked by their mainstream news outlets.Quite the informed discussion, no doubt, taking place in every Starbucks across America—chock full of blame and lacking in substance, but what’s important is that finally the political left can relax after they get a president who they feel represents them and maybe the fear of this whole failing country will subside temporarily.But what does that mean?Very little to us, and soon enough it will mean less to you, dear readers.Living a filtered reality seems like a nice safe and blissfully ignorant sort of existence but the painful truth of the matter is that most people are happy with it.But not us, here at the Elf Wax Times.We want to see an antenna poking out of someone’s head, and abrasions on the film, and some asshole mucking up what would otherwise be a good shot – that’s reality, and truth, and needs to be left the fuck alone.And while three vague images of war being spliced together to make one very gruesome scene is captivating, it’s a god damn lie.Ordinarily, we here at the Times might embrace such a thing, but the fact that it is played off as anything more than basic entertainment is a slap in the face to our common values of decency and honesty, of our gullibility when it comes to taking the word of the press.To be told a lie is the truth.How far of a cry, then, is it to say that everything we know about existence could be one hundred percent false?How many times does the news, or a class, or a preacher, or a hobo inspire you to ask yourself that question?Here’s a tip:we exist only as a figment of our collective imagination in regards to what we believe ourselves to be a part of.Now alter a photograph of that.The expansion of the mind counters any argument that the human race is solid or long-lasting. What we believe people are and are not has less than nothing to do with what the Universe mapped out in its violent, birthing flicker at the release of all known energetic potential almost 14 billion years ago.