Jay Kenny, A Roanoke man, sat in his favorite comfortable chair Thursday, thinking the world would just pass him by as it has done for the last five years. That is, until a book deal and a Sports Illustrated contract fell into his lap from the ventilation system overhead. 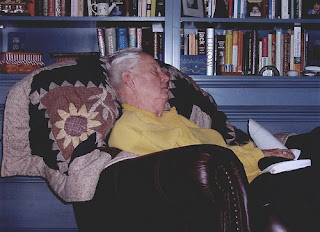 American author Jay Kenny making headway toward goals
“I was just staring out the window thinking, ‘Gosh, the world sure does change as fast as the second hand counts a minute nowadays.’ But I remember noticing that my back lawn and the bushes and trees always look the same,” said Mr. Kenny, retail employee.

Jay went on to express his renewed attitude toward life, and lack of certainty around what he will do next. “Now that I can be the writer I always dreamed of bein’, I just don’t know what I’ll write about! Sports? Politics? Social trends, the government? War and peace; it’s all out there for me,” he said with a grin.

Jay Kenny said he’d already grown accustomed to day-to-day life without ambition. “Paper hits the door every mornin’. The songbird sings my favorite tunes,” he said. He went on to describe how he’d come to delude himself into believing a life without any distinction whatsoever does not evacuate the happiness from his soul, but in fact brings him a form of satisfaction. “Things here are just how I want them to be. Pretty much all the time. Grass stays cut. Neighbors are friendly. Known them about fifteen years now. What little money I get pays the gas bill, heating, lights, health insurance, life insurance, car insurance, homeowner’s insurance, water. With what’s left I buy food. Sometimes I have enough left and I’ll even buy myself a big old steak dinner. Me and Gus,” he said, pointing to his dog. “I guess I might just write about that.”

Mr. Kenny said he would not investigate the duct-work of his home, telling reporters the weight of the curiosity around what caused his dreams to come true by simply neglecting to actively pursue them can be remedied with a good Marlboro cigarette and a shot of whiskey. “I don’t like to ask no questions,” he said. “Something told me I’d be a big novelist one day and people would want to know what I’ve got to say about things. I just believed in myself. And that’s probably how I was able to keep my routine of television, forty hours at Staples, and shopping at Kroger. I knew it’d all pay off eventually.” And it did.