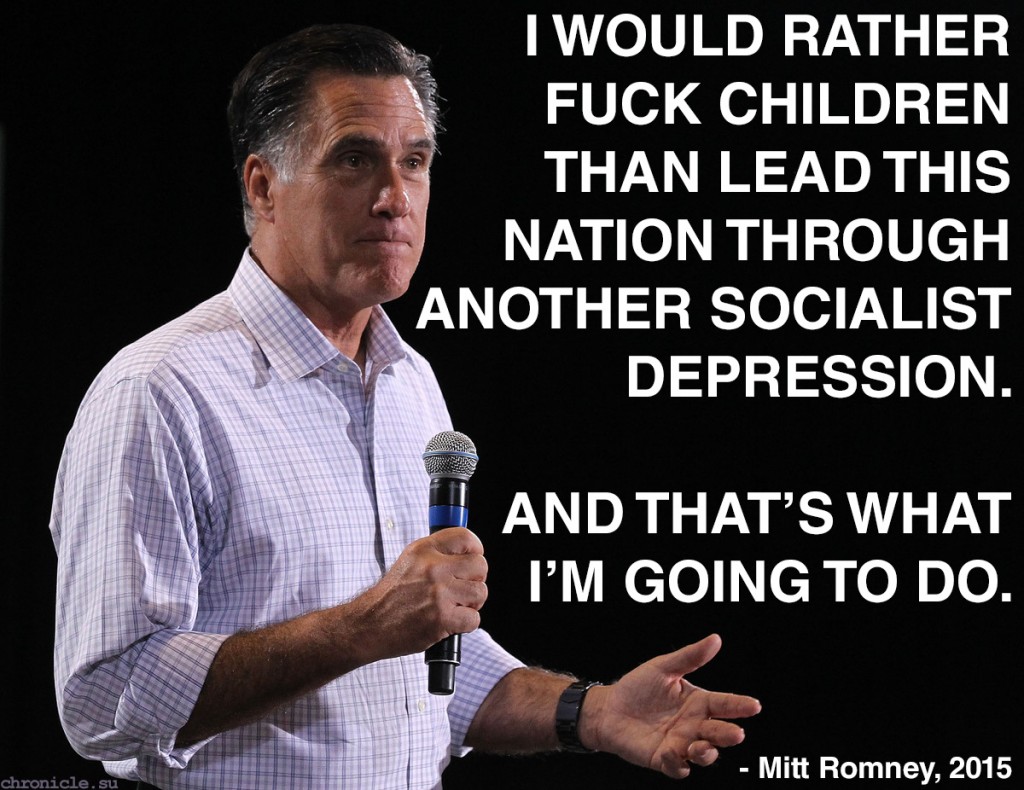 JACKSONVILLE, FLA. – Speaking from the deck of his personal boat, Tea Party Candidate for President Grady Warren, who received an early 2011 endorsement from The Internet Chronicle , outlined a daring plan to fight big government. Through the instatement of “re-education camps” targeted at at-risk members of the youth population too ne’er-do-well to serve as janitors in their high schools, Mr. Warren’s plan will see a brighter future.

“That future is out there,” said Mr. Warren. “It is waiting for us. Our children deserve it. Our nation depends on it. The peace and freedom of the world require it. And with your help we will deliver it. Let us begin that future for America tonight.”

The National Education Association, he explained on his fishing vessel, “Little Skippy,” is in fact a money-laundering criminal organization, a tyrannical behemoth serving as the iron fist of the virtually omnipotent teachers’ lobby. Over the course of President Obama’s first term public school teachers have seen their collective bargaining rights enhanced and expanded, and their nominal salaries rise to levels unseen since the close of World War II. U.S. schools currently pay teachers exorbitantly, with compensation and pensions far higher than in any other industrialized nation.

Speaking in a comfortable pair of shoes from a Madison, Wisconsin picket line February 17, 2011 President Obama expounded upon his own proto-fascist ideology: “The United States is the greatest nation on earth. Therefore as long as I am its president its teachers will receive no salary, no wage lower than any other nation’s.”

1. Re-open military bases and allow any serviceman or servicewoman forced away post-BRAC to return to the more convenient location.
2. Utilize 2010 census data to locate households containing (or likely to shield) impoverished teenage or young adult black males.
3. Conduct a poll of the Tea Party Caucus mailing list of Representative Michele Bachmann (R-MN) on the nature of what constitutes an “American man” and have the Defense Department develop a curriculum based on these scientific findings.
4. Use the new, improved National Defense Authorization Act’s powers to detain all targets.
5. Transfer all targets to the re-education centers, each target’s designated center decided by lottery.

Mr. Warren’s five-point plan, which Redditors have likened to the plot of “Bioshock Infinite,” undermined Mitt Romney’s southern strategy throughout the summer. Mississippi Republican voters, for instance, of whom a plurality are opposed to the legality of interracial marriage, were seduced by the Tea Party candidate’s smoother hair and moral fortitude. “We were worried when we heard Mr. Romney was wearing that blackface on Univision,” said Gloria Porter, 29, of Jackson. Her husband, Bobby Porter, his crossed arms moving abruptly between her and this reporter, said he was concerned that Mr. Romney was encouraging “race-mixing.”

As a consequence of the poll damage Anonymous candidate Grady Warren was doing in the South, Mr. Romney released four attack ads that targeted Mr. Warren’s plan to entice legally present ethnic minorities into sanctuary cities. Bill Murphy, social media director for the Romney campaign who has previously warned Americans about the oncoming black-on-white race war, told The Washington Times September 22 that Mr. Warren’s plan to actually offer cash assistance to “incent the lowest rungs of the 47 percent rabble” was barely an improvement on President Obama’s own wealth redistribution schemes. Added Mr. Murphy, “Americans aren’t fooled by the Warren bait-and-switch of offering security while encumbering job creators with these cash allowances, which are extracted through force. Why should Americans have to pay the race pimps and class warriors to go away?”

In April 2011 Grady Warren received The Internet Chronicle’s endorsement after he made clear that America’s wealthiest are not only powerfully independent and self-sustaining but also victims of everyone else.

President Barack Hussein Obama II, whom the ivory tower elites have designated to glide to victory on the backs of the Houston chapter of the National Association for the Advancement of Colored People, may be able to rig enough electronic voting machines in Ohio, Colorado, Florida, Virginia and Pennsylvania. But Real America will know that Mitt Romney was the real winner.

Larry Sabato, director of the University of Virginia Center for Politics, said Monday it is possible that Republican Presidential Nominee Mitt Romney may very well win the popular vote, as Al Gore did in 2000, while ultimately losing the electoral vote. “Abercrombie & Fitch clothiers throughout the greater Los Angeles metropolitan area,” he said, “are bracing for hordes of Caucasian looters and rioters.” Korean American proprietors  of free-standing Disney Stores are taking special precautions, knowing that European Americans may prove not only zealous, but also sufficiently well-armed, to attempt to make off with golden era anti-Semitic merchandise from the “Disney Vault.”

After an embarrassingly forced visit to a soup kitchen, Paul Ryan failed to accrue more votes for himself and aspiring war criminal Mitt Romney.

On his way out, Ryan encountered a free black man. Ryan then demanded the Uncle Tom’s name, but refused to stop and talk with him.

Bill Murray is also known for “crashing parties” by showing up to wash random homeowners’ dishes, but Paul Ryan has found that a demeaning tone, paired with not actually washing any dishes, goes over just as well as he doesn’t care that day about anything going on around him.

Born and raised here, are you really? Cool. I’m from a town, similar, called Weansley.

Ryan walks away while the man was still talking to him.