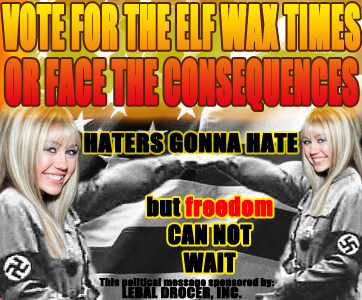 Whitehorse, Canada–Sarah Palin was seen jumping out of a dirty, overloaded pick up truck Tuesday and crossing the Canadian border to steal single-payer Health Care.

Canadian Border Police shot and killed several accomplices to the ex-Governor of Alaska, but failed to deal any lethal damage to Mrs. Palin, who used retarded people as a shield to deflect bullets and public outcry.

Due in part to this story’s inflation by the mainstream media, Canadian officials are now being forced to consider the decision to build a wall extending from coast to coast, to pacify the loudest minority.

Analysts expect the project to be outsourced to illegal immigrants pouring in from America to do the job, further fueling flames of xenophobia.

“We used to hustle over the border for health care we received in Canada,” she said. “And I think now, isn’t that ironic?”

Since Palin recently got a taste of political gain, her opinion of what once was her best source of useful, valuable health care has transformed it into the disease of big government-run death panel waiting rooms of Satan, where even souls are aborted.

Sarl Cagan, Chief of the Royal Canadian Mounted Police told reporters, “As of right now, we believe Sarah Palin is living with between eight and fifteen other border-hoppers in a house without electricity or running water. Sources tell us they’ve seen her selling oranges by the side of the freeway, doing construction on the wall, boycotting schools, and demanding amnesty.”

Sarah Palin is expected to report back to FOX News by the end of this weekend, their spokesperson told The Elf Wax Times, who then added, “assuming Mrs. Palin’s declining intelligence does not get any worse, at which point her brain might catastrophically divide by zero.”