Our generation is doomed to the cooperation of all distributors of every major known resource in a valiant effort to turn a buck on the entire human race at each opportunity, degenerating us with PR incentives into an unquestioning, unthinking, digitally satisfied, technologically gratified, self-tending human plantation. If things continue at the pace iPhones and on-demand cable have set out, then we will not evolve, but devolve, the opposable thumb becoming civilization’s fiercest natural enemy.

The total output and sheer growth in numbers of cell phone towers will finally generate a large enough volume of short radio waves through polluted air to double the rate of all conditional cancers so as to make yet more money off the same resource, selling vital medications until the usefulness of a particular hominid’s living insides is so rotted, drugged up and decomposed that only local funeral homes can pick off the last few thousand dollars left in his or her insurance fund. One final score for the cash-vultures willing to carve up your corpse and who don’t mind breathing in a little formaldehyde.

As the Indians took and used all parts of the buffalo but the brain, which they used against the animal’s configurable habits to control it into the killzone, so too does the invisible hand of our unseen master from the front porch of his far-off third-world plantation. 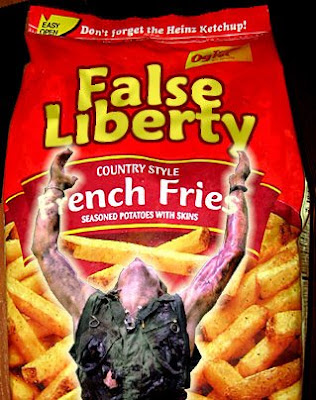 “False Liberty Fries know their place-gorging your fat face”
Pop these suckers in your oven while you think of doing the same to the French bastards who invented them. Eat them all in one sitting, it’s a free country. Fry them in oil if you’re a real American, and let them get done right so the fuckers really get drenched in that delicious trans-fatty digestion nightmare. Jesus may have died for your sins, but False Liberty Fries died for your stomach. Who the fuck cares about sins anyway, when you have False Liberty Fries.